As the smallest national park in Alaska, Kenai Fjord National Park, surprisingly, attracts way too much attention. So much that one of only four presidents to visit all 50 states, former president Barack Obama took Kenai Fjord National Park tour during his presidency in 2015. If even the presidents of the US chose the Kenai Fjords as one of his primary destination during his three-day-visit to Alaska, it makes us wonder what makes it so special.

Located at the edge of the Kenai Peninsula, near the picturesque town of Seward, Kenai Fjord National Park spans 669,984 acres. Home to the Harding Icefield, one of the country’s largest ice fields, the park features numerous fjords that, apparently, gave name to the place. Nearly 40 glaciers participate in creation of the fjords – narrow and deep inlets formed by submergence of a glaciated valley. Despite the small size, Kenai Fjord National Park is not a place that you can cross over by a bike or motorcycle. Without road assess except for Exit Glacier, the park is best to explore from a deck of a boat. 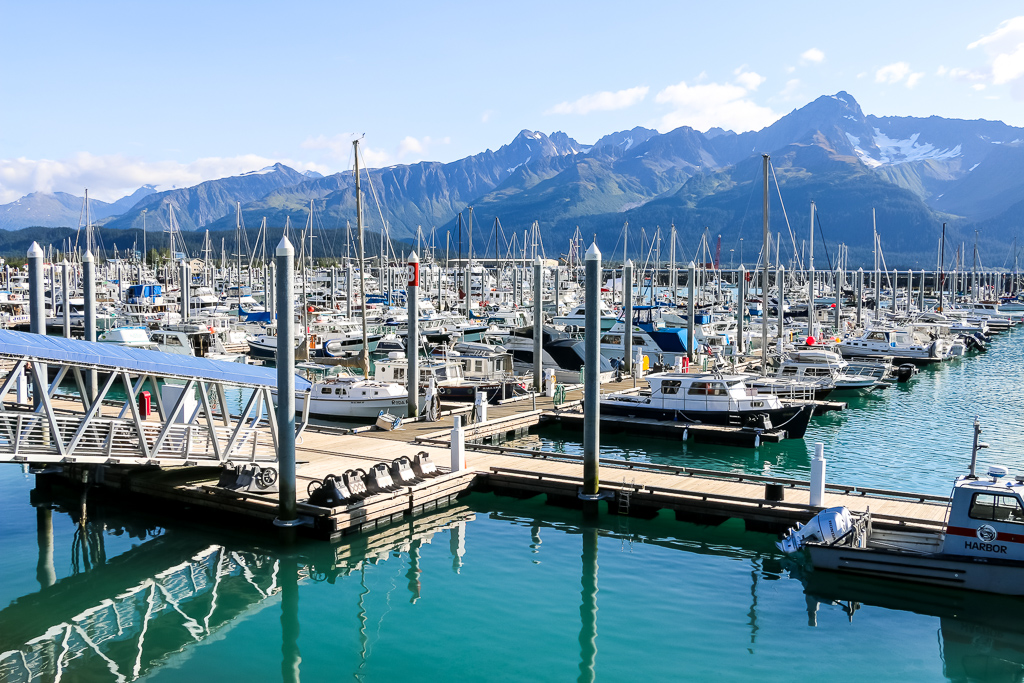 The picturesque town of Seward.

Getting a Boat: Major Marine Tours

Getting a tour boat is a piece of cake. Big companies such as Major Marine Tours, Kenai Fjord Tours and Alaska Fjord Charters offer half to full-day tours. Most of the cruises are available from mid-May until mid-September. The boats usually depart form Seward or Whittier, small towns in southern Alaska settled approximately one-hour drive from each other.

For our Kenai Fjord National Park excursion, we booked a half-day tour with Major Marine Tours. When even President Obama succumbed to the services of this company, then we felt pretty confident to wholeheartedly rely on his choice. We arrived in Seward from Anchorage a few hours earlier to give ourselves time to explore the shore of the peninsula before venturing into its blue waters. Approximately half hour before the departure, we entered the wharf in search of our cruise ship. 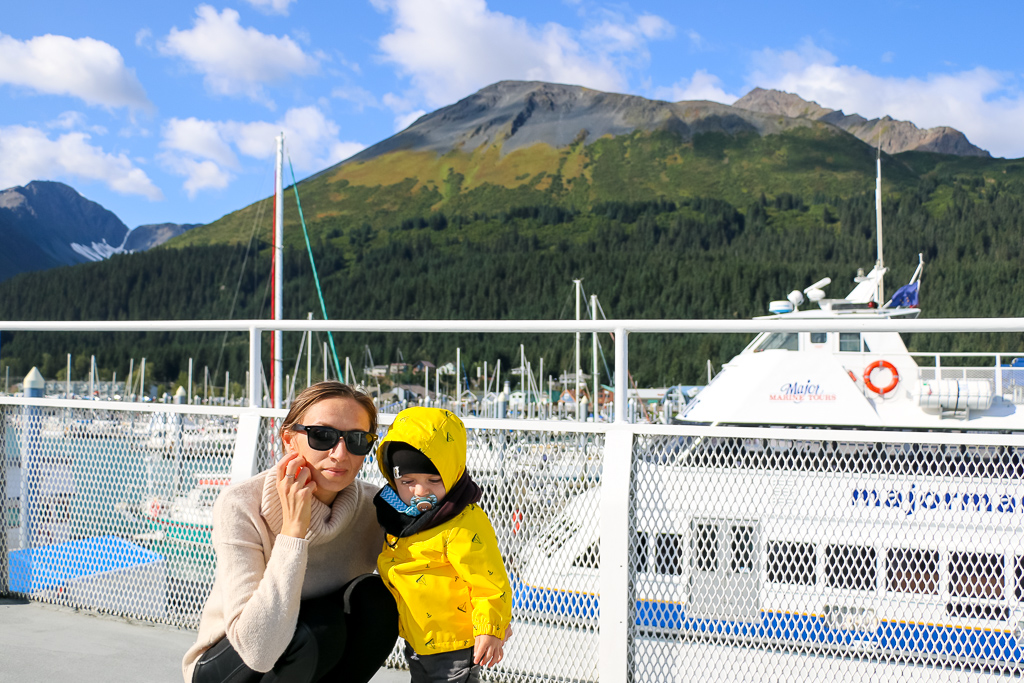 “Star of the Northwest” was an easy target that was pretty difficult not to spot right away. Standing as the far end of the pier, the biggest vessel wide opened its door for enthusiastic Kenai Fjords’ explorers. The spacious boat with friendly, entertaining personal and lunch buffet consisting of Alaska salmon, prime rib (not my choice though), rice pilaf, fresh sourdough bread, green salad, and desert promised an exciting five-hour adventure around Resurrection Bay and Kenai Ford National Park area.

Sharp at noon, captain of our Major Marine Tours vessel gave last call and the cruise ship took off. Words cannot describe what a blast was awaiting us ahead! Alaska’s landscapes with their breathtaking glaciers, deep fjords, gigantic mountains, and tiny settlements at the far shores followed by narration of our ranger Aubrey slowly unveiled their beauty as we processed farther into the bay. 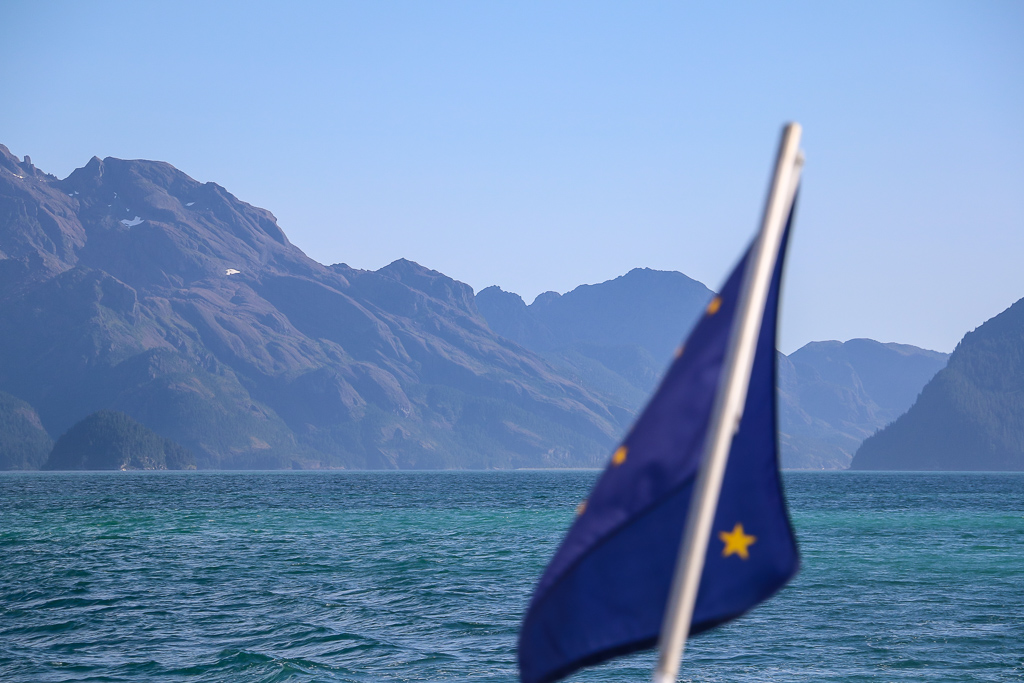 It did not take long before almost every passenger on the board left their assigned tables inside the warm cabin and rushed to the deck. Closely surrounding the ranger as if not to miss her even single word, numerous smart phones and advanced cameras set to work. I am sure all those amazing pictures could make for some of the best illustrated and detailed books depicting the astounding natural beauty of Alaska. With my not so meager photo arsenal, I would definitely claim a spot in such book-creating activity!

But leaving the pictures aside (no matter how hard it might seem), we need to focus on our main mission – exploring the famed Kanai Fjord National Park and Resurrection Bay, so called “gateway to the Kenai Fjords”.

Although officially becoming a national park only in 1980, the area of what is now known as Kenai Fjord National Park was not exempt of devastating effects of the 1964 Alaska earthquake, also called the Great Alaskan Earthquake. Causing great destruction and damage, the earthquake took lives of near 139 people. Some people suggest that the earth tremor would have killed more people if it did not occur on Good Friday. Time when majority of the residents left the affected area for an upcoming holiday. 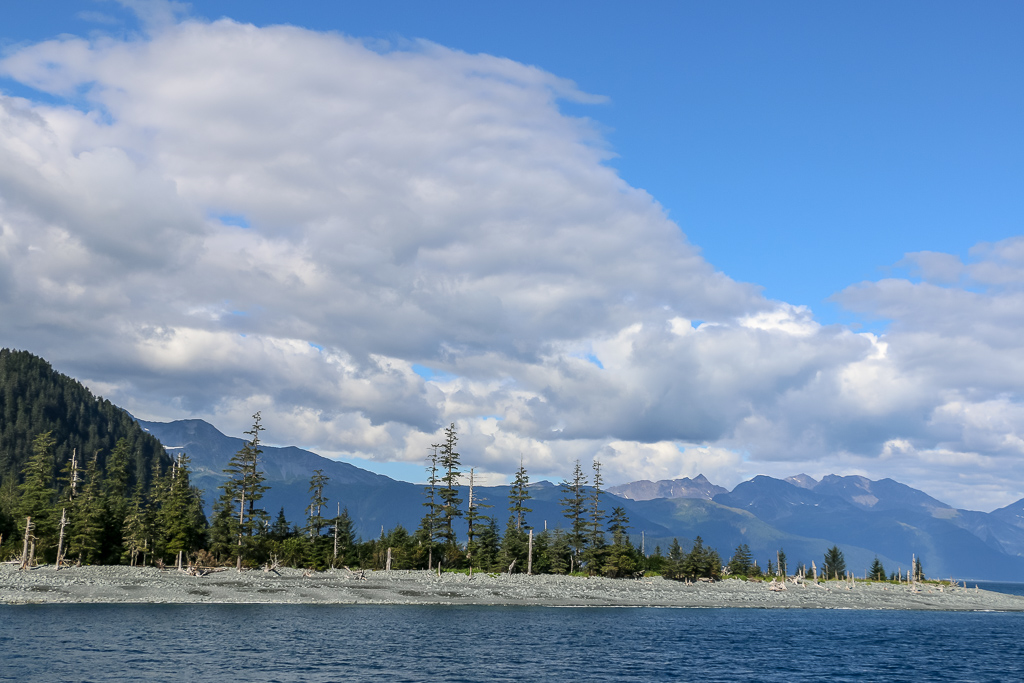 Even today, 50 years after the catastrophe, some areas of the park still carry prominent marks of the earthquake.

Lasting four minutes and thirty eight seconds, the magnitude 9.2 megathrust earthquake became the most powerful earthquake in North America. It is also known as the second largest earthquake in the world. Ground fissures, soil liquefaction, landslides, and collapses of the damaged buildings followed the earthquake causes further damage and casualties.

Kenai Fjords National Park had its own share of devastation. Induced by the Great Alaskan Earthquake, underwater landslides created tsunamis that hit coastal areas, reshaped their surface, and brought irreparable damage. Even today, over 50 years after the catastrophe, some areas of the park still carry prominent marks of the earthquake.

Little-known fact: Resurrection Bay and its surrounding arear including Kenai Fjord National Park was a strategic point during World War II. To keep the bay unoccupied was at most important task of the US armed forces. After Pearl Harbor attack, fearing future potential assaults from Japan, the US Congress sent the military forces to Alaska.

Having most of the bases located in the coastal areas of the state, Resurrection Bay, due to its ice-free waters all year long, assumed a pivotal role in transporting the military reinforcement and supplying US bases with ammunition and food in case of the Japanese attacks.

As mentioned before, near 40 glaciers exist within Kenai Fjord National Park. That is approximately one quarter of all Alaska’s glaciers. Abundance of snow, gravitational flow of ice, and suitable natural conditions of the park create an excellent place for continuous formation and growth of these natural phenomena. Even if you never saw a glacier before, a large, persistent body of crystalline ice, snow, and rocks will not make you guess twice. When cruising with Major Marine Tours, you have pretty good chances to Godwin, Aialik, and Holgate Glacier. 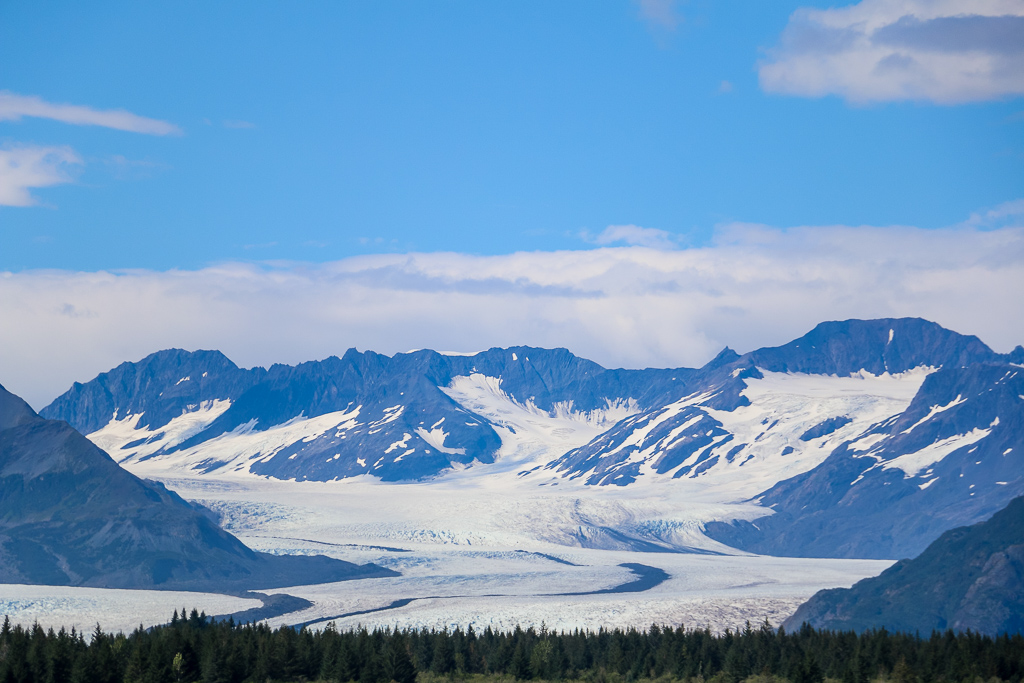 Bear Glacier is the longest glacier in the park.

Our uniformed National Park Ranger Aubrey admitted though that Bear Glacier was her favorite. I could not agree more! The longest glacier in Kenai Fjords National Park with its adjacent lagoon is everything you ask for. The winding shape of the Bear Glacier with one of its legs entering the lagoon where enormous icebergs tower over blue waters looks magical and dreamy. A place that you want to explore and have some of the most exhilarating experiences of your life. So get ready for epic paddling through the ice-cold waters of the lagoon and camping on the outer beach near the glacier.

Despite its harsh terrain and unpredictable weather, Kenai Fjord National Park is home to diverse array of plants and animals. Bears, beavers, mountain goats, coyotes, moose and gray wolfs thrive on the land of this part of Alaska. While sea otters, sea lions, whales, porpoises, and harbor seals call the colds waters of the park their home. Numerous birds, up to 191 species, also dwell on the territory of the Kenai Fjords.

Watching the wildlife is always an unforeseeable experience. You never know whether or when the animals or birds appear and for how long. During our half-day Major Marin Tours ride we were fortunate to observe horned puffins. Cozily lined up on small ledges of the huge mountains, these tiny birds reminded colorful toys lost at the sea. Looking a lot like penguins, the puffins have actually not a lot in common with their southern doubles. Still, regardless of their origins, watching these large-headed creatures with brightly colored beaks was a sheer pleasure. 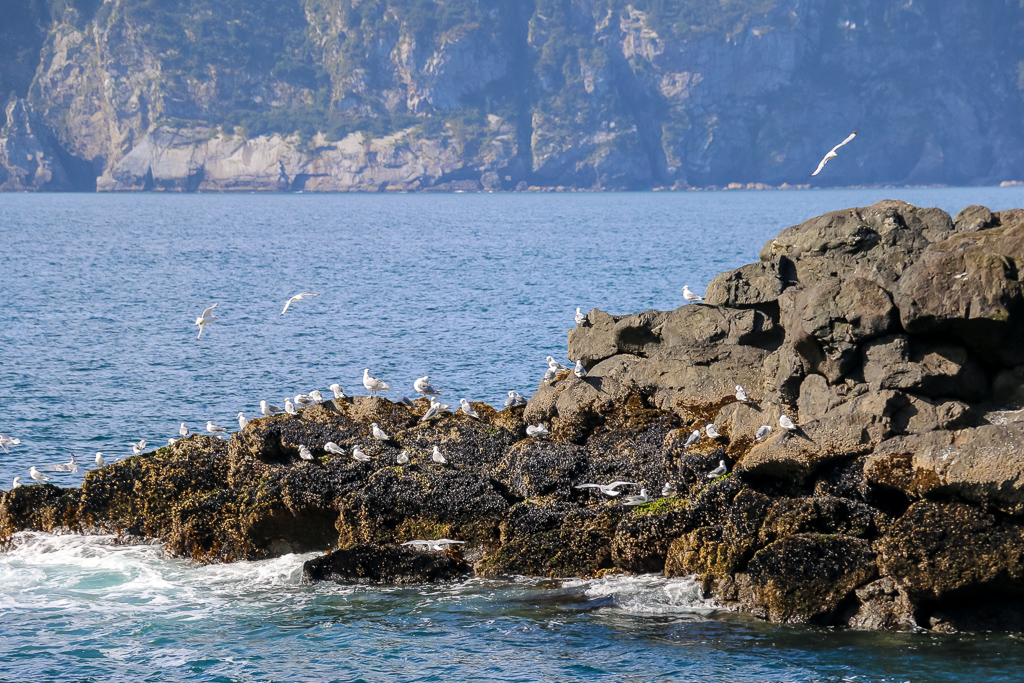 Other birds such as kittiwakes and bald eagles frequently kept us company during the excursion. At some point, we even saw sea otters and harbor seals absorbed in their daily activities without giving too much attention to the cruising vessel in the near distance. Toward the end of our journey, peregrine falcons with their signature pointed wings and long tails rewarded us with their presence.

But the climax of the cruise was, undoubtedly, encountering three orcas. Leisurely swimming in the bay, they seemed to have really good time, maybe even playing and competing with each other. Better known as “killer whales”, the orcas are quite unique and stunning mammals. Despite their unofficial name, they are not whales at all but the largest representatives of the dolphin family. And like other dolphins, the wild orcas, reportedly, do not pose any harm to the humans. 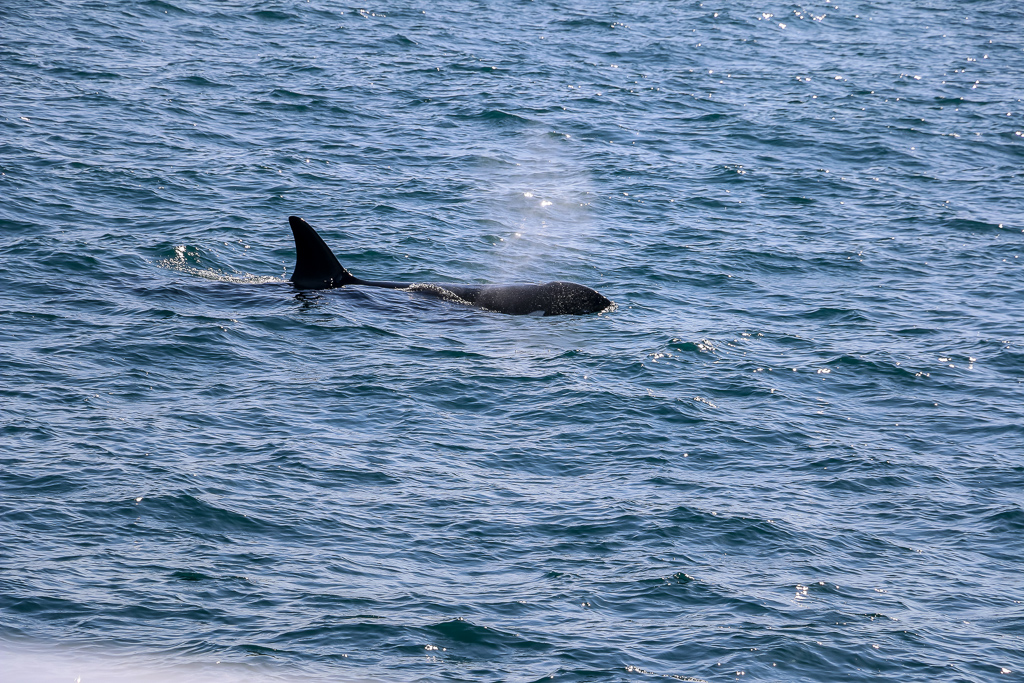 One thing that caught my attention in Aubrey’s narration about these marine animals is the fact that the orcas are matriarchal creations. The females always lead their loyal tribes-pods and take care of baby orcas that usually stay with their mothers regardless of their sex and age. Watching the killer whales from the boat, our extremely informative ranger-narrator and other members of the crew agreed that the biggest mammal of the three resident orcas in the waters of Kenai Fjord National Park was none other than a female. So, girls do run the world, after all!

That is a Wrap!

Without a doubt, the Kenai Fjords is a must see destination on every traveler’s list. The stunning scenery, enormous glaciers, incredible history, and rich wildlife of Southeast Alaska simply cannot be ignored. There is something for everyone and for every type of interest. We traveled with Major Marine Tours, but with the abundance of other cruises-offering companies, your choices are very broad. So, select you tour provider, decide on your favorite season, and enjoy every bit of Kenai Fjord National Park.

The Cliffs of Moher is one of the most beautiful p

Ireland was colonized by England. When Queen Victo

There are three things you can always find in Galw

This is how I pictured Ireland: old and gray. But,

About four months ago in Ireland I went to Galway.