My biggest concern of visiting Prague was if we had enough time to see all its spectacular sites and attractions. After reading and hearing tons of beautiful things about the capital of the Czech Republic, I made sure to spend at least two days. Almost two days, to be precise, since we landed in Prague in early afternoon on a Saturday and left it in the evening the following day. With this amount of time on our hands, Prague walking tour appeared to become the best way to explore the main city of the Czech Republic. Equipped with old-fashioned city map, we effortlessly strolled through Charles Bridge, ventured to the Old Town Prague and finished our Prague waking tour by admiring the Dancing House. With that being said,

HERE IS OUR PRAGUE WALKING TOUR FROM CHARLES BRIDGE TO THE DANCING HOUSE: 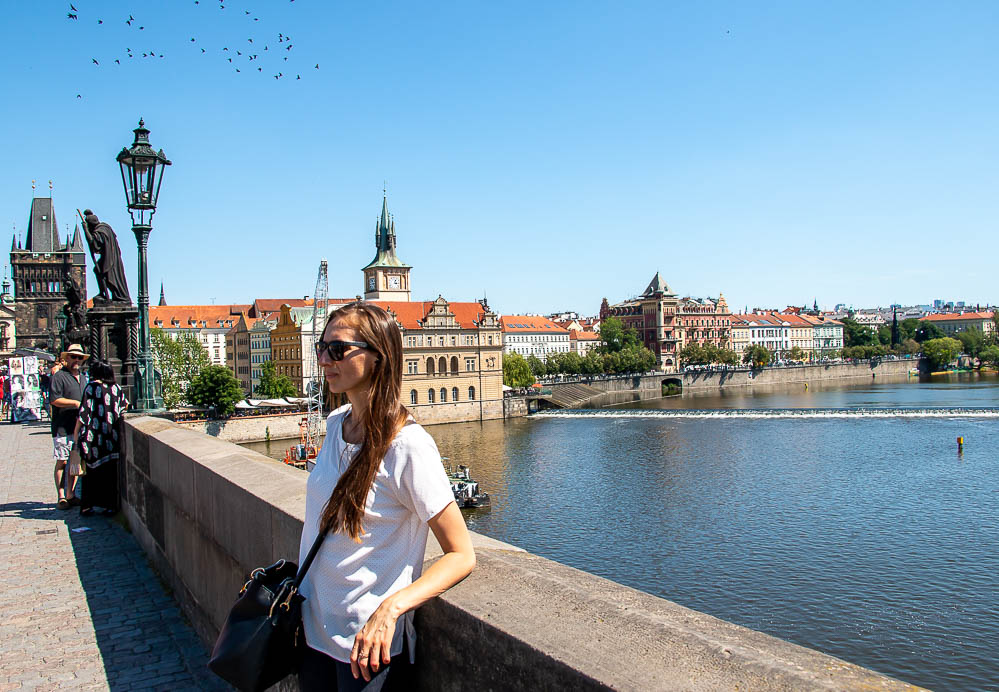 There is no way to commit to any Prague walking tour without first stopping at famous Charles Bridge. With reputation far exceeding its size, this historical monument is one of the symbols and main attractions of Prague. Completed in the beginning of the 15th century, Charles Bridge went through some turmoils and survived many floods. Today it’s Prague’s most popular pedestrian bridge with street vendors, musicians and never-ending crowds. 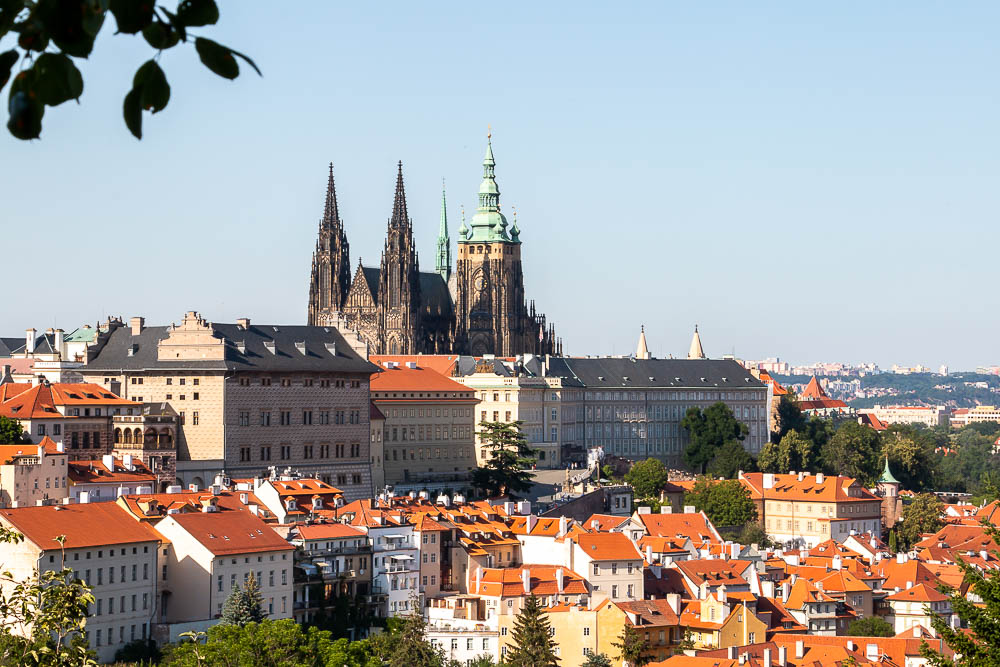 While majority of visitors make the Old Town their second stop, we went in the opposite direction and headed straight to the Prague Castle. Honestly, a walk through Charles Bridge in the afternoon at peak of its “visiting hours” set the course of our Prague walking tour. Joining the maddening crowd to cross the bridge once again looked less appealing than venturing to less touristic, west side of the Vltava River first. Thus, the Prague Caste became our Prague walking tour’s perfect second stop.

The Prague Castle is old. In fact, built in the 9th century, it’s one of the oldest structures in the city. Moreover, as the largest coherent castle complex in the world, it didn’t escape an honor of becoming a UNESCO World Heritage site. The Prague Castle includes big palaces and ecclesiastic buildings with St. Vitus Cathedral being the most recognizable among them. 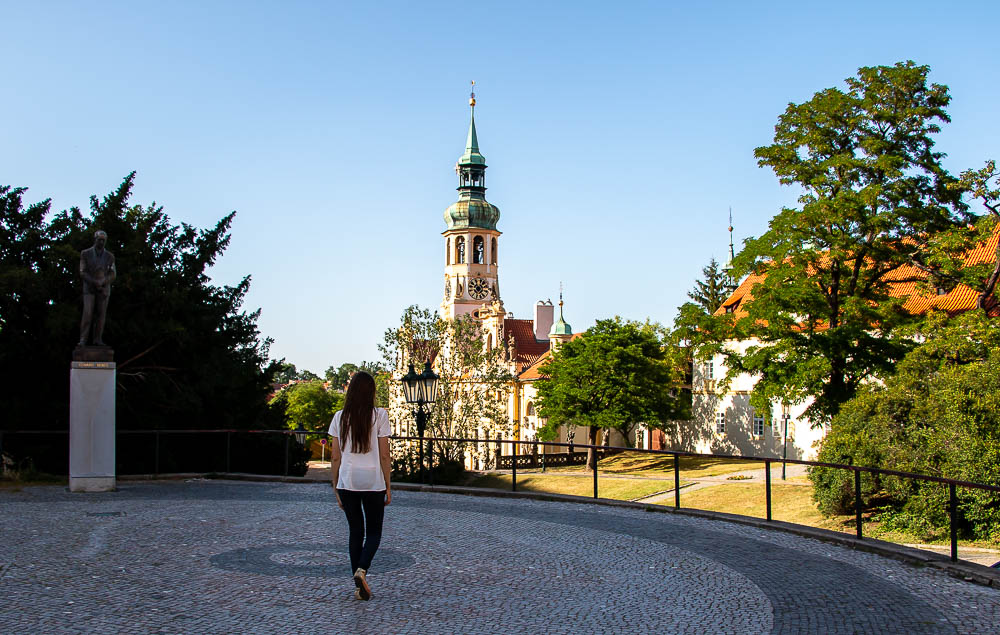 The Prague Loreta is located in Hradčany Prague just a short walk from the Prague Castle. The beautiful Baroque pilgrimage complex in Loreta Square includes a cloister, the Santa Casa, the church of the Lord’s Birth and a clock tower. 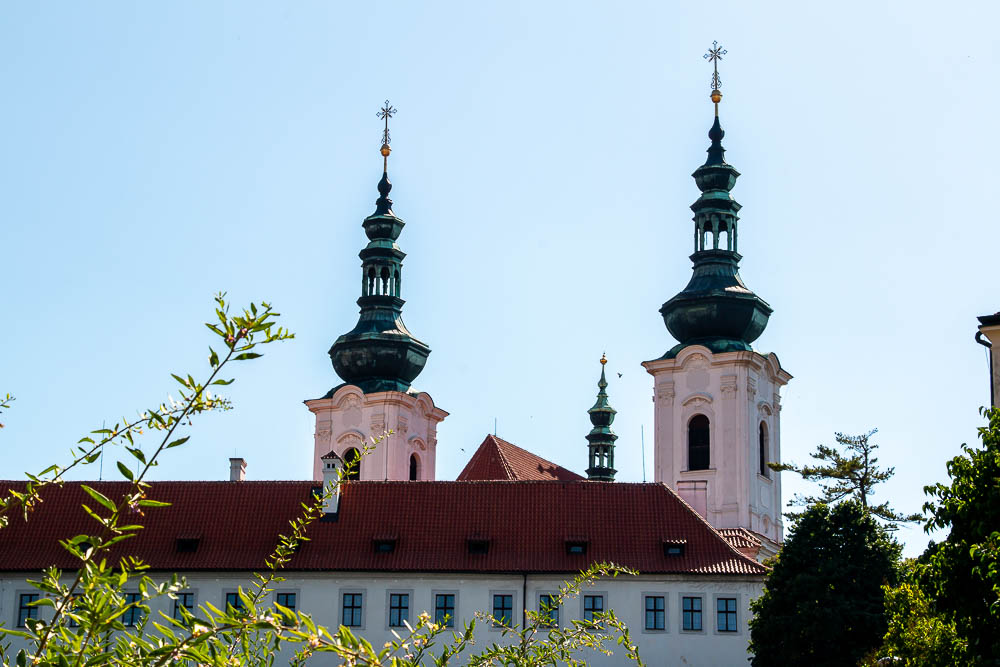 From the Loreta, our Prague walking tour took us uphill to the Strahov Monastery. As one of the oldest Premonstratensian monasteries still in existence, the place reminds an idyllic garden with stunning architectural masterpieces. Two twin Gothic spires signify the exterior of the monastery. The inside of the building is famous for the Stravol Library and the Strahov Gallery with medieval manuscripts and Gothic, Baroque and Rococo paintings. 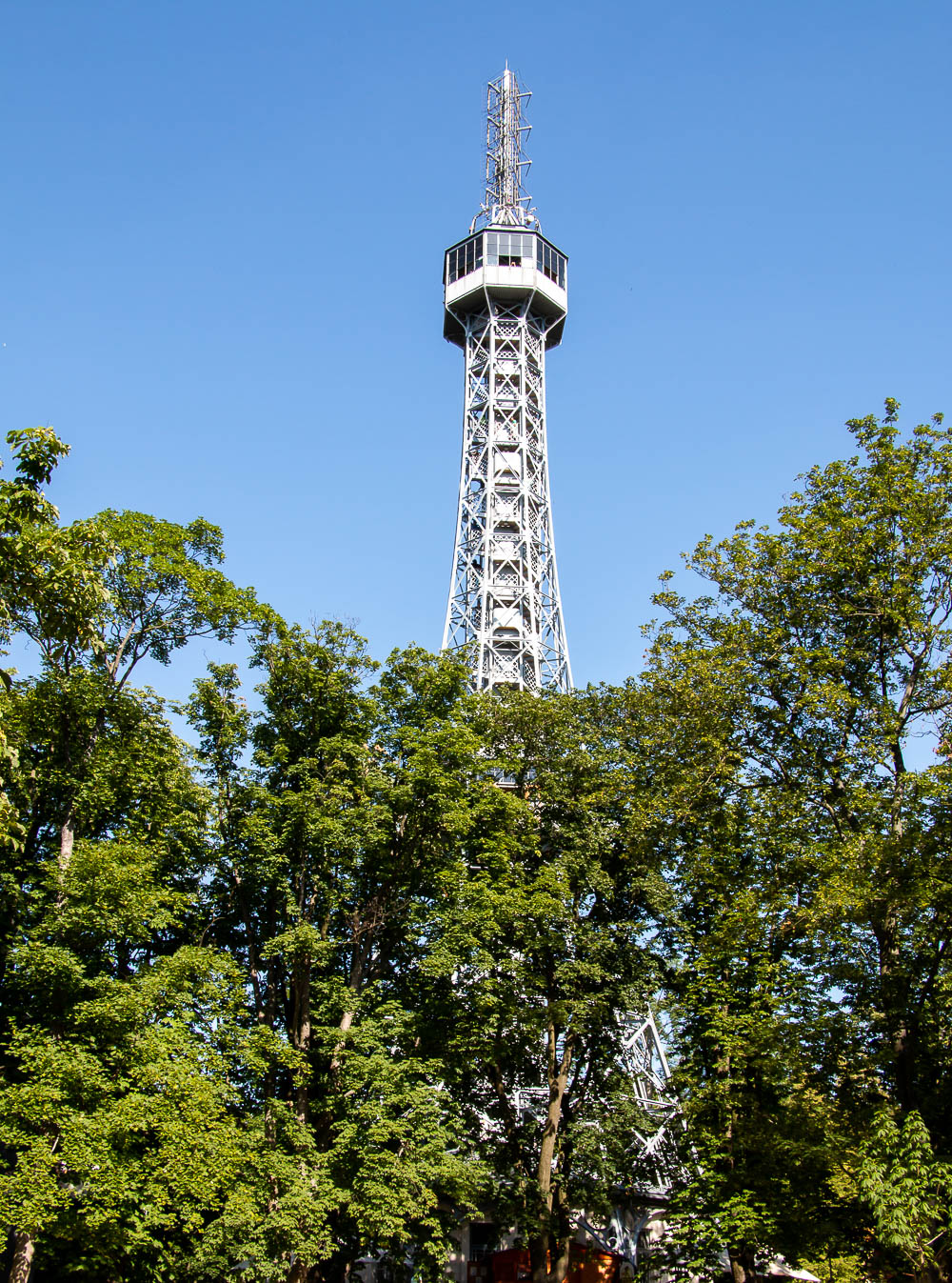 The Petřín Lookout Tower or the iron lady of Prague is 63.5 meters tall and offers panoramic views of the city. Walking paths with benches, a few playgrounds, rose garden and Mirror Maze make it a perfect place to escape the hustle and bustle of the city. 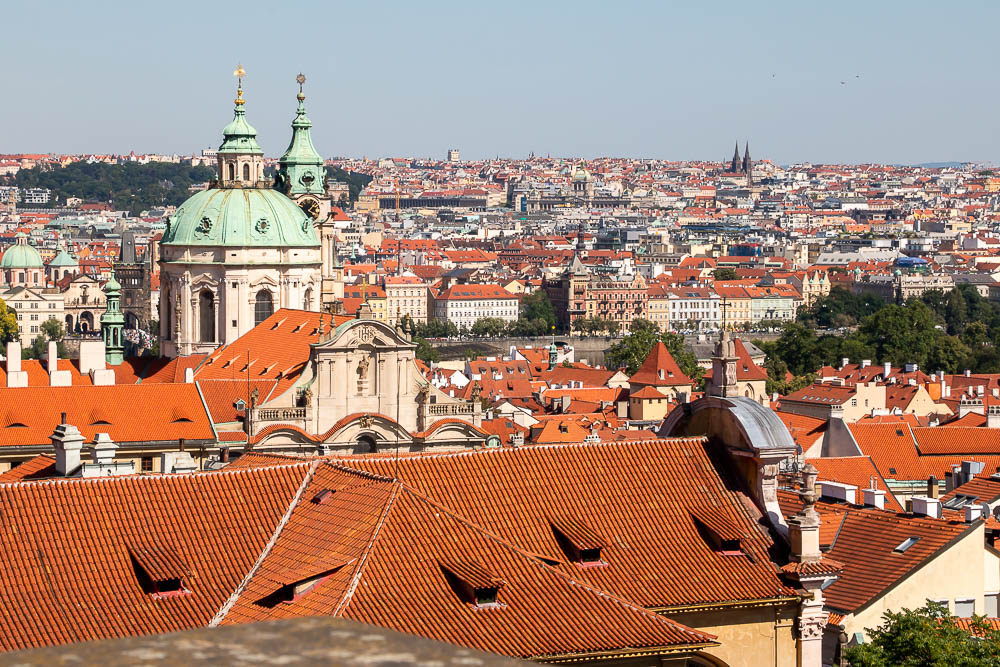 St. Nicolas Church in the Lesser Town of Prague is one of the greatest examples of Prague Baroque. Its green copper roofs of the dome and spire towering over this part of the city allure visitors and locals alike. On top of that, St. Nicolas Church is home to numerous masterpieces such as frescos and sculptures. 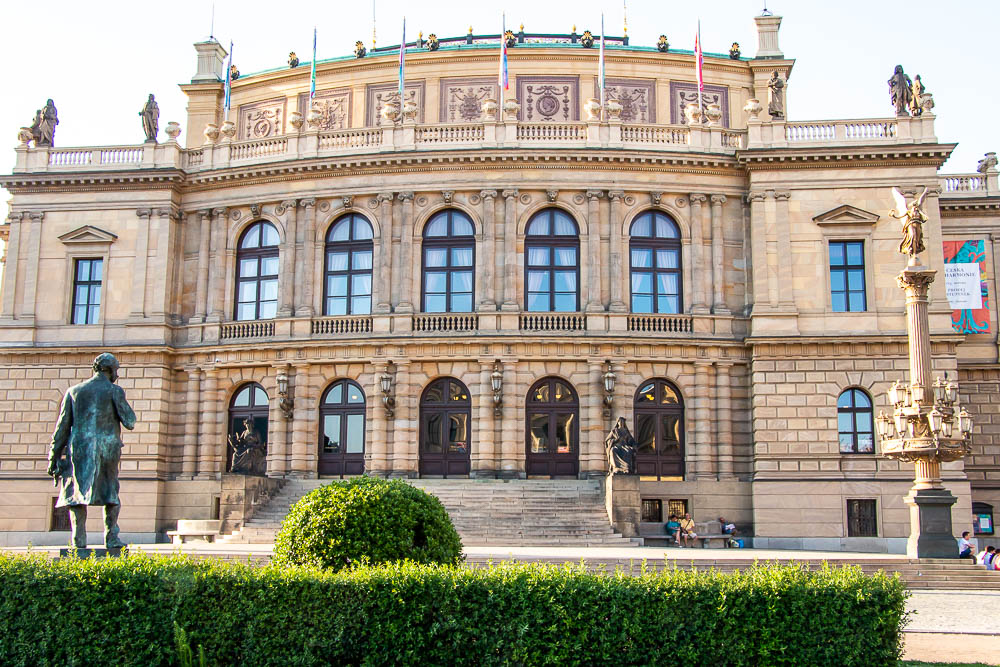 As sun sets late in Prague in summer, we continued with our self-guided Prague walking tour on the east side of the Vltava River. Crossing Charles Bridge in the evening was such a big difference compare to just a few hours earlier. The crowds diminished significantly, and we were able to finally look closely at the beautiful statues aligning the bridge.

The first place in this part of the city and the last stop on our Prague walking tour for the day was Rudolfinum. The Neo-Renaissance structure on the bank of the river is home to the Czech Philharmonic, the Gallery Rudolfinum and the Café Rudofinum. 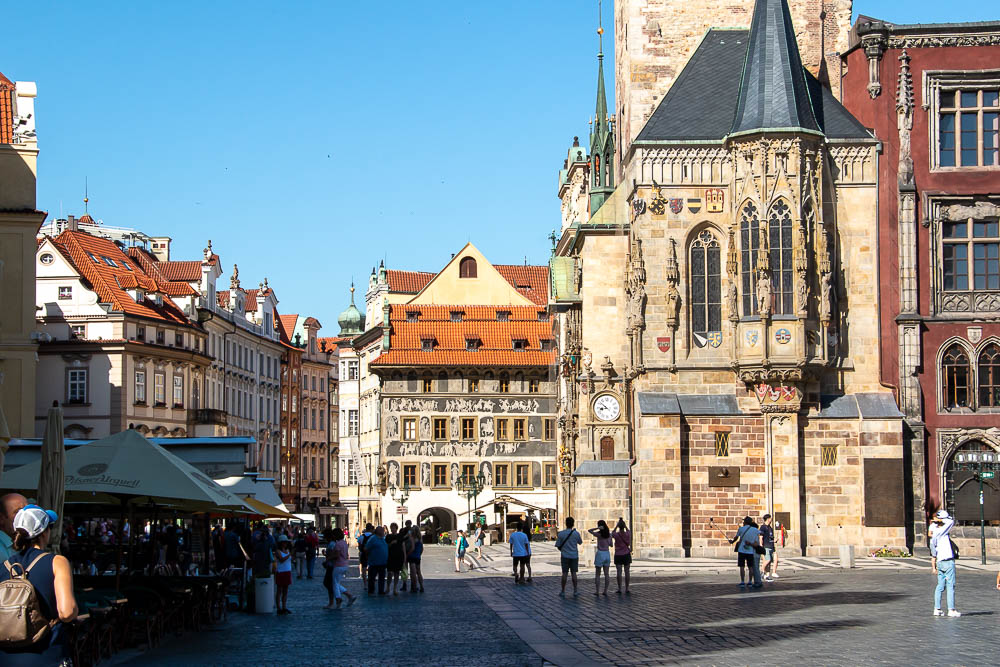 The next morning we resumed our tour by venturing to the Old Town way before the crowds occupied the places. While no strict itinerary was set up this time, there were a few places that we didn’t want to miss. The Old Town Square was just one of them.

One of the most popular places in Prague, the Old Town Square is located just a few minutes away from Charles Bridge. With several major attractions along with hotels and restaurants nearby, the place almost never gets empty. In winter, Christmas market turns the Old Town Square into the most festive and busiest place in Prague. The Old Town Hall is the most prominent structure in the Old Town Square. Completed in 1364, it was the tallest building in Prague at the time. Even though it gave this title to the Žižkov Television Tower in 1992, the Old Town Square still pleases its visitors with iconic city views. 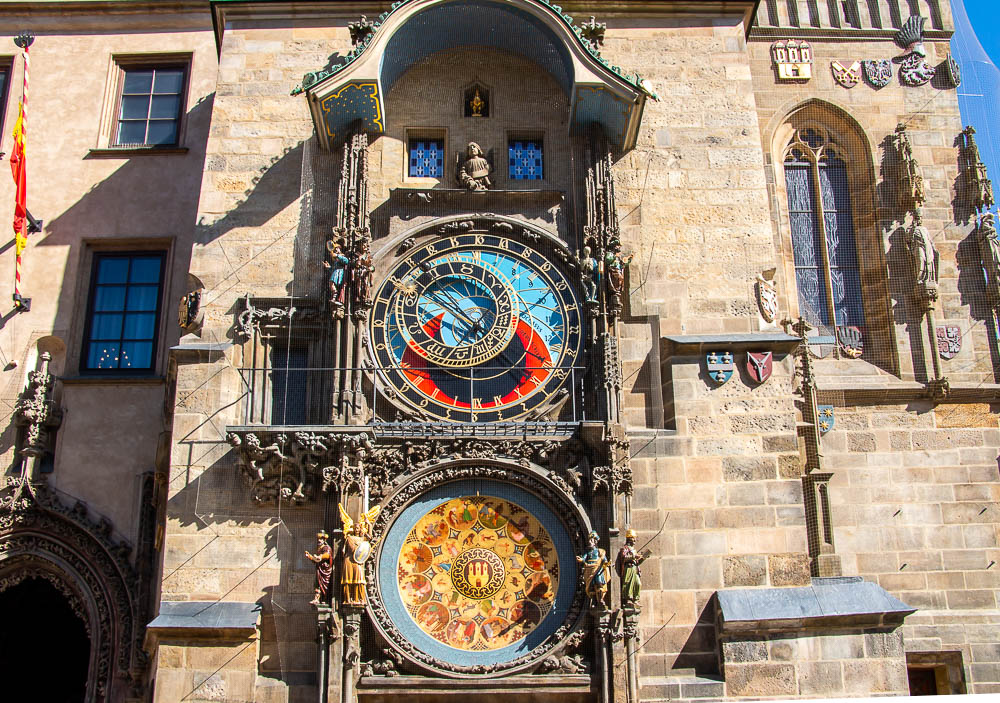 Adjacent to the wall of the Old Town Hall, the Prague Astronomical Clock is the oldest clock still in operation. Every hour between 9 am and 9 pm, the clock gathers the crowds eager to see a show of 12 wooden apostles appearing in two windows.

Church of Our Lady before Týn 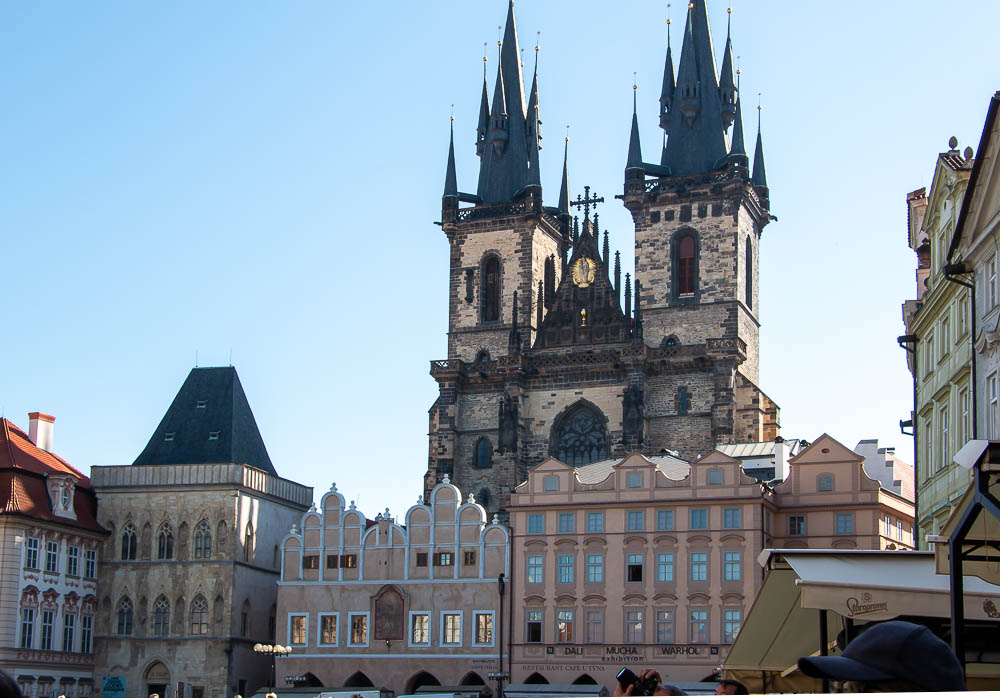 Gothic towers of the Church of Our Lady before Týn are by far the most photographed structures of Prague. Located across the Old Town Hall, they are an integral part of every picture of the Old Town Square. Once one of the original city gates, the Powder Tower is a Gothic Tower that separates the Old Town from the New Town. 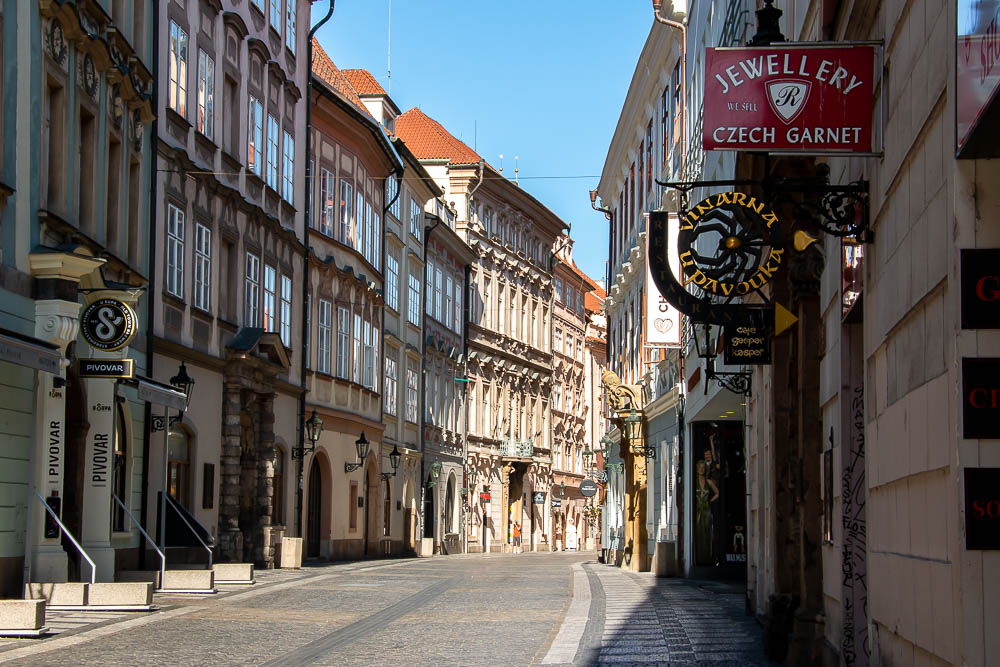 The Prague walking tour can’t happen without exploring Josefov. The former Jewish ghetto, Josefov introduces you to the Jewish culture and tells you about the Jewish past and present. Additionally, the place entices with trendy shops and kosher restaurants. 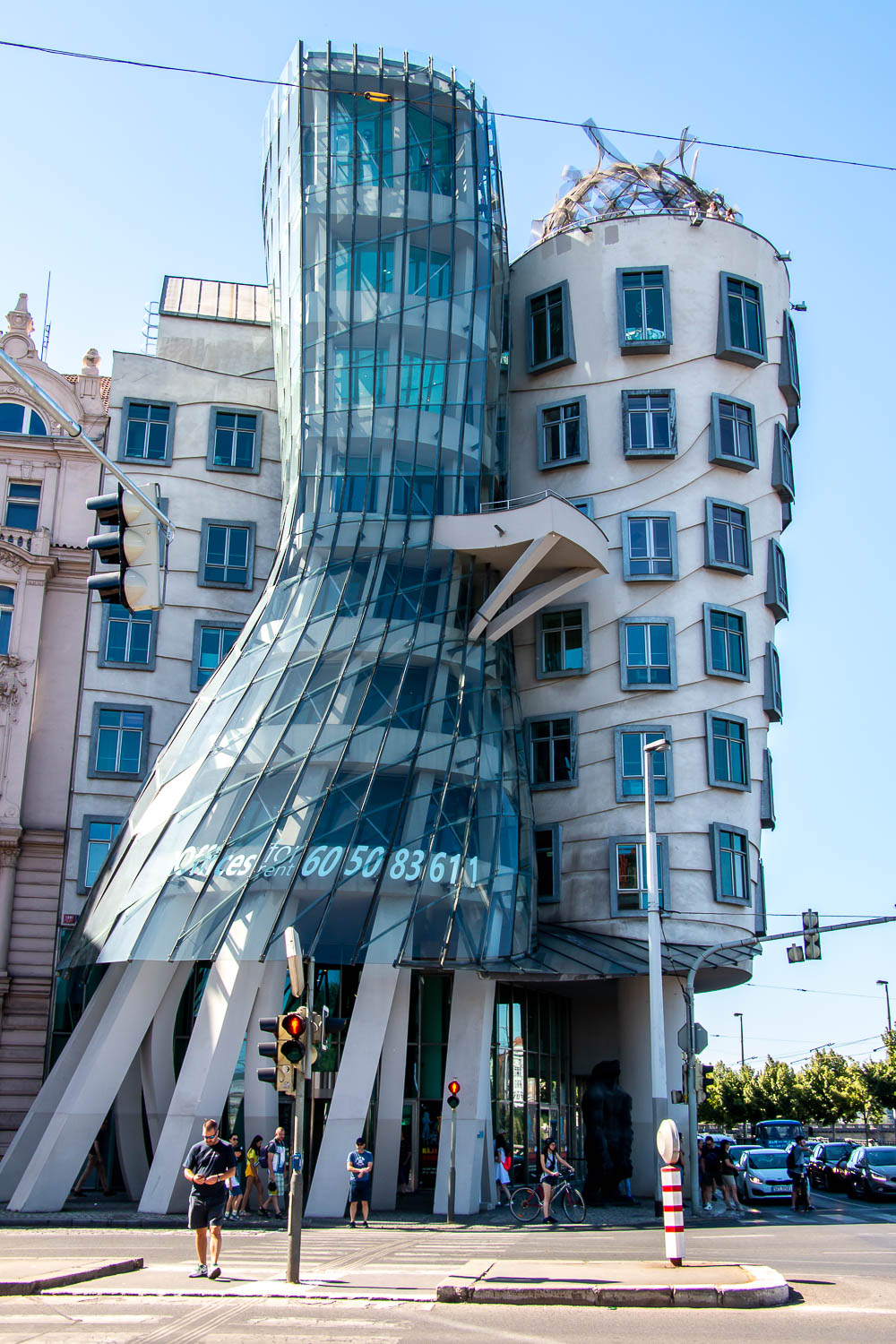 The Dancing House is the farthest place of our Prague walking tour. It takes approximately twenty minutes walking from the center of Prague to reach this architectural masterpiece. Inspired by famous Hollywood couple, the stone tower of the building is devoted to Fred Astaire. The glass tower symbolizes a beautiful lady and Astaire’s famous dance partner Ginger Rogers.