Short and sweet is my way of travel. Not necessary by choice, but rather by circumstances. In most cases, there are only so little time off in a year, and so many beautiful places in the world to see. I became sort of an expert of taking out the most with the least time available. Kiev or Kyiv, however, interrupted this pattern. With its grandiose size and things to do and see, you need more than one day to explore the capital of Ukraine. Those who like yours truly don’t have this luxury still should not shy away from the opportunity to visit Kiev. A short visit to Kiev won’t show all the treasures of the city, but will definitely ignite your wanderlust and make you want to revisit the city once again.

To Visit or not to Visit Kiev

If once I dreamed of visiting Kiev, events of the past years put that desire on the back burner. Political turmoil and revolutions were destroying the city and the whole country from the inside and made it unsafe to travel to. Even though the latest Ukrainian revolution of 2014 was over a while ago, I was still reluctant to visit Ukraine and its capital, Kiev.

Prior even planning our short visit to Kiev, I asked people who had traveled to Ukraine before about the safety and political situation in the country. They didn’t feel any fear and ensured me that the situation in the country and particularly Kiev had stabilized. There were still more armed military and police officers patronizing the streets of Kiev that you could see in other European cities. (Their presence definitely didn’t escape our attention during our short visit to Kiev a few days later.) But overall, it was safe to travel to Kiev or other parts of Ukraine. Kiev wouldn’t be considered a walkable city. Even though, there are many places you can reach and explore on foot, at some point services of public transportation or a taxi is necessary. Public transportation is well-developed and preferable to stay on budget during your visit to Kiev.

Metro is by far the most reliable and fastest type of public transport. Buses, trolleybuses and trams are your next choice especially in the areas that metro doesn’t cover. Public transports in Kiev start working at 6-7 am and cease their operations at 11pm – 12 am depending on the type and location.

Taxis are also a very popular type of transport in Kiev. I’d recommend avoiding their services though, since it’s not that cheap. (Although some sources I checked prior our visit to Kiev claimed the opposite.) However, if time is an issue, the taxis are the fastest way to get around.

Uber has recently appeared on the streets on Kiev and is a great alternative to the old-fashioned taxis.

Those who arrive in Kiev via Kiev Boryspil International Airport can either hire a taxi, Uber or use Skybus to get to the city. Besides being the cheaper option, Skybus, however, has a few disadvantages. It takes approximately one hour to get to Kiev’s main railway station. From there you need to take other public transportation to continue to your desired destination. 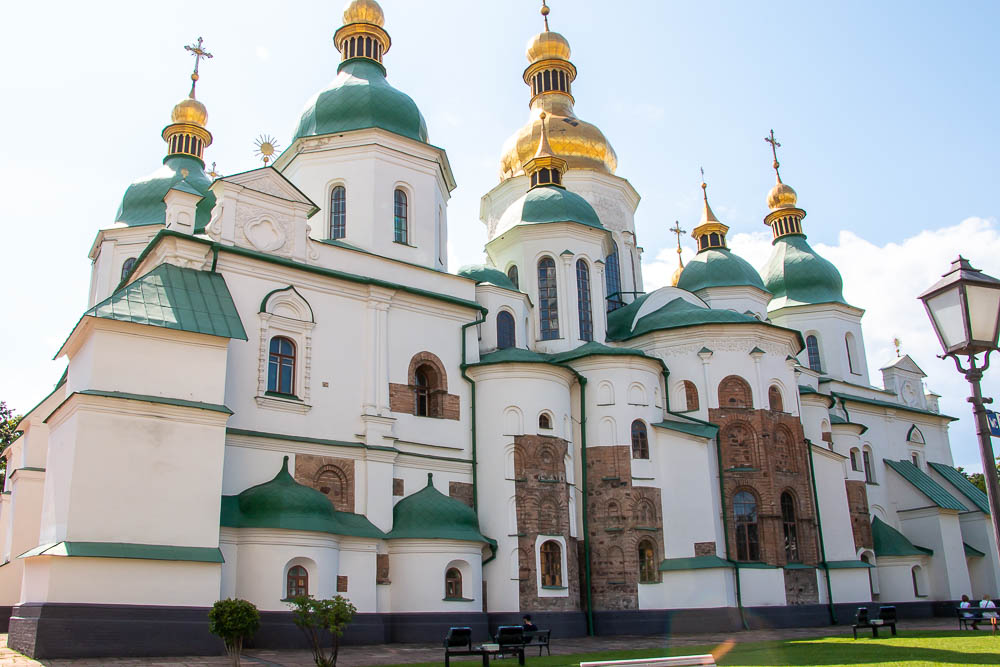 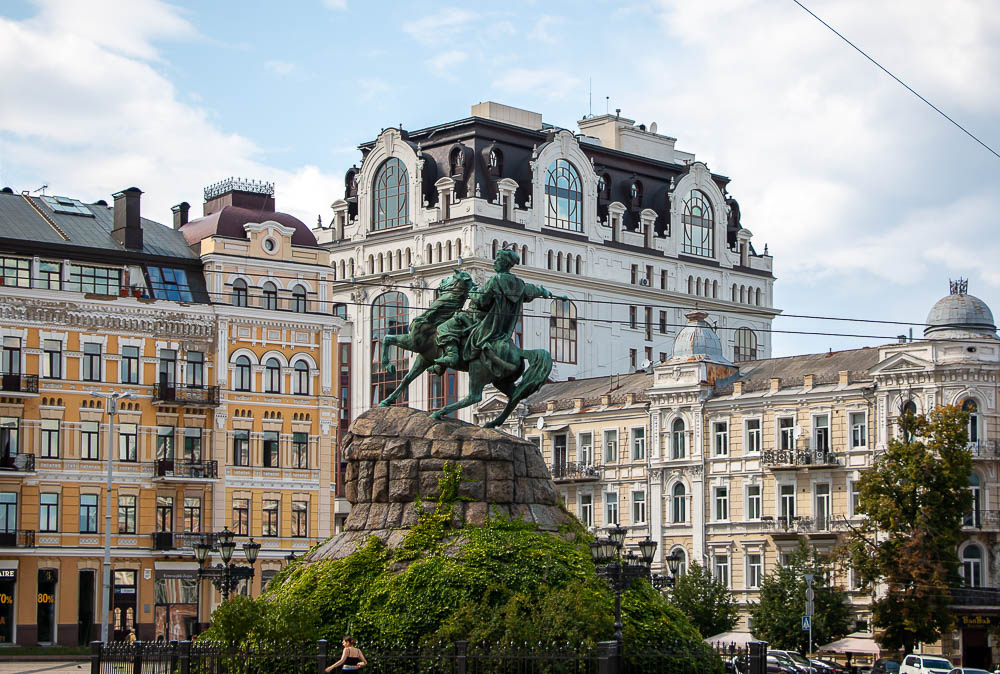 Places to visit in Kiev

Kiev is not a city you can explore in one day. Simply, because it’s way too large and its landmarks are way too scattered to see them all during a short visit. Nevertheless, the center of the city is very walk friendly and features some of the main attractions within a short walk from each other. But regardless of the duration of your visit to Kiev, the following are the places you must see.

One of the first World Heritage Sites in Ukraine, St. Sophia Cathedral is Kiev’s oldest church and one of the finest examples of Ukrainian architecture. Apart from the main building, the cathedral features a bell tower that you can enter for a small fee and the House of Metropolitan. 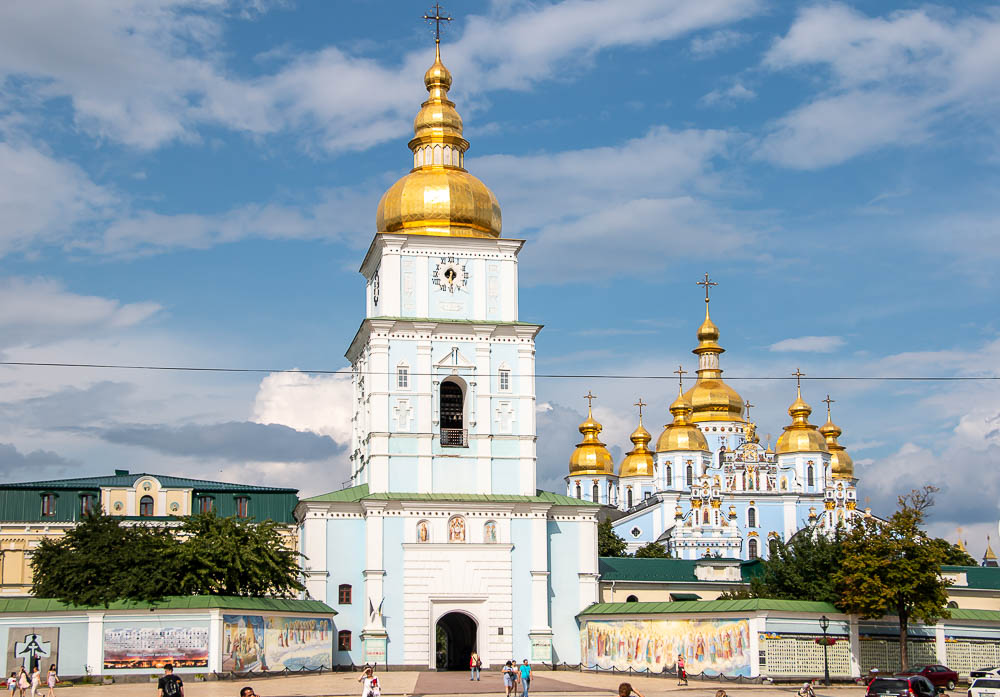 Located opposite St. Sophia Cathedral, St. Michael’s Golden-Domed Cathedral impresses with its sky blue walls and golden domes. Originally built in 1108, the Orthodox men’s monastery was destroyed during the Soviet time. After the crush of the Soviet Union, the reconstruction of St. Michael’s Golden-Domed Monastery took place and was completed in 2000.

A short walk away is located Independence Square, better known as Maidan Nezalezhnosti or simply Maidan. One of Kiev’s main square, it’s most famous for the role it played in the Ukrainian revolution of 2014.

From St. Sophia’s Cathedral, a seven-minutes walk via Volodymyrska Street takes you to the Golden Gate, the main gate left from the old fortifications of Kiev.

Kiev Pechersk Lavra is one of the most remarkable and must-visit places in Kiev. With its gold-domed churches and underground labyrinths, the place boasts history and secrets that ask for a separate visit to Kiev. Apart from tourists, the Lavra opens its doors to Orthodox pilgrims from all around the world. 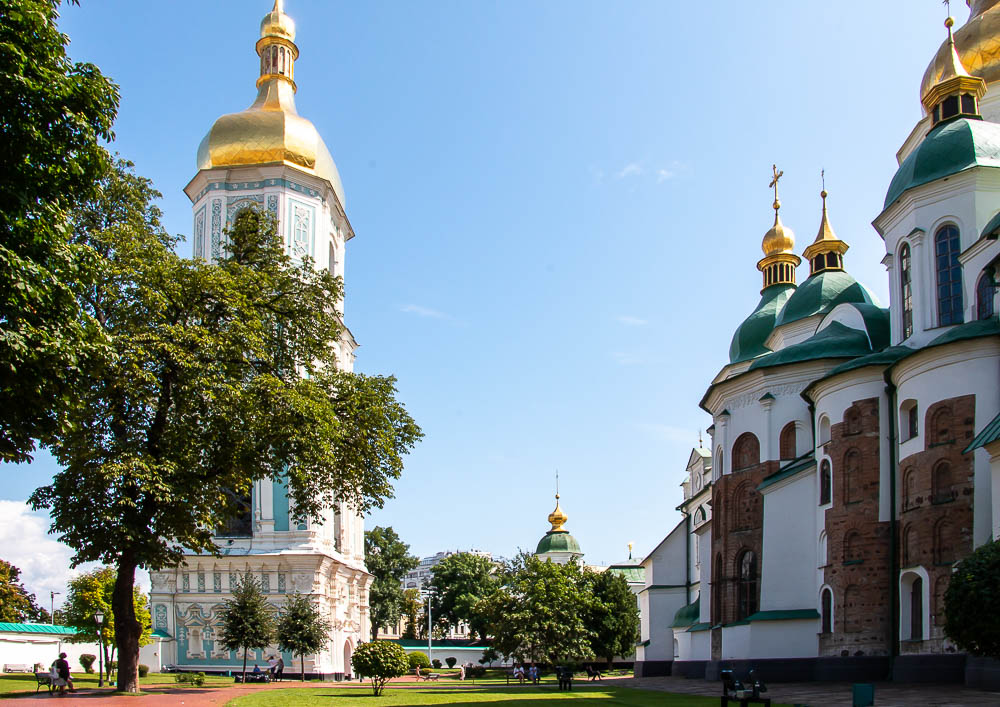 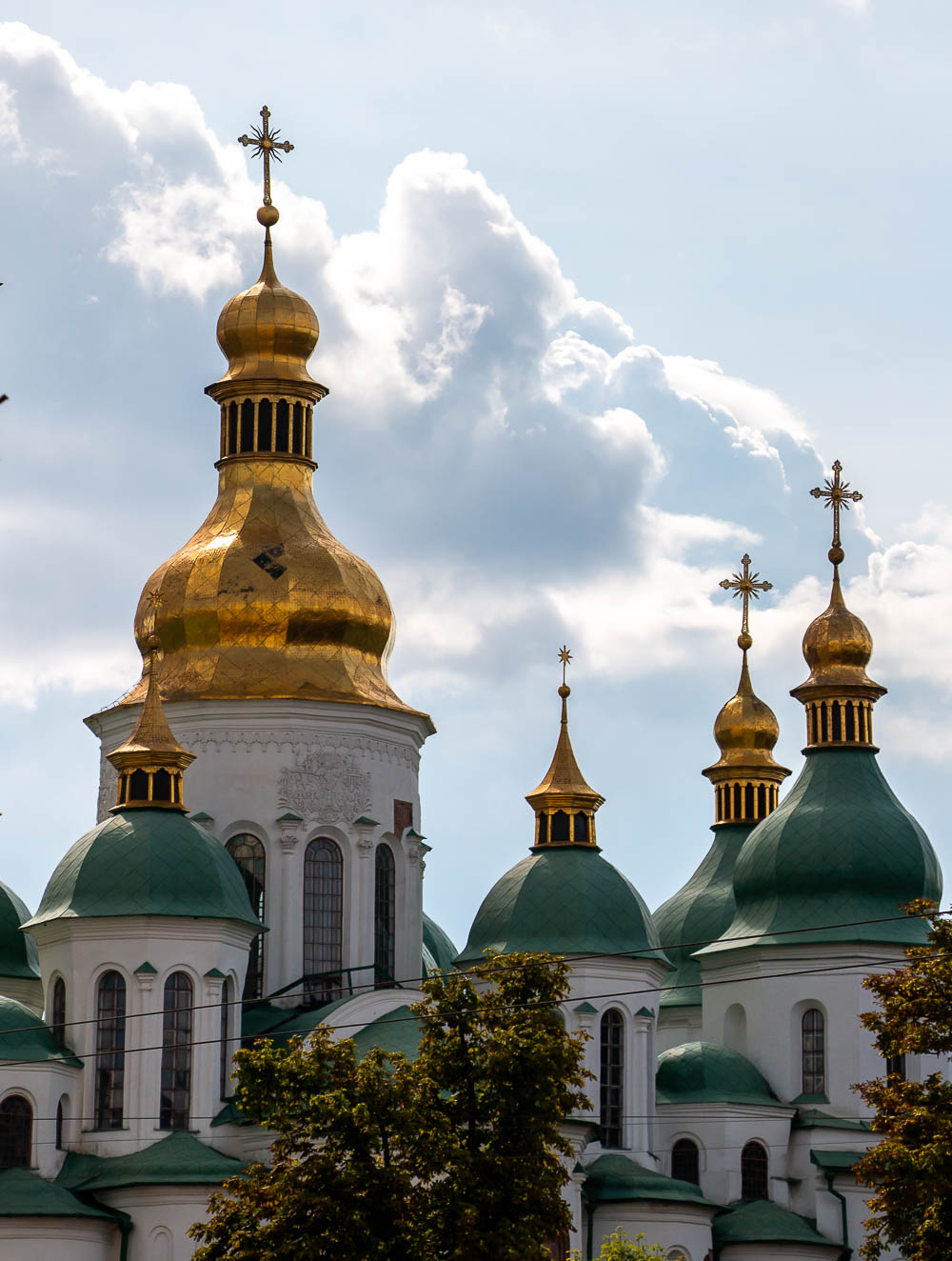 Things to Know before Visiting Kiev