There is always something to add to your experiences in Marrakech. Every time you look at your pictures from Morocco, a new story pops up in your head. Sometimes all you need is your travel album or computer to tell an unforgettable story of Marrakech in photos.

A Story of Marrakech in Photos

Marrakech has been long open for travelers from all over the world. With just 2-3-hour flight, the Europeans visit the city regularly. Their longer trips usually involve immersing deeper into Moroccan culture. (Marrakech in the following photos is a great example of it.) And the short weekend adventures mostly focus on shopping. At the same time, the travelers from other regions of the world devote at least a few days to the city. And although Marrakech is nowhere as big as London or New York, its lifestyle and cultural heritage is in no way inferior to other popular destinations.

Marrakech is one of those rare places that you need to see in person, to feel it. As a matter of fact, in Marrakech, you need to be an observer and let the city surprise, overwhelm, and even shock you. While these 7 photos open just a tiny window into a big world of Marrakech, I hope they inspire you to visit the city sometime after Covid-19 lockdown is lifted.

HERE IS A STORY OF MARRAKECH IN PHOTOS

Officially known as Marrakech, the city is often called the Pearl of the South, symbolizing its importance as a cultural, religious, and trading center of Morocco. Other nicknames, the Rose City or Red City, emphasize dominate color of Marrakech. As you can see in these Marrakech photos, all buildings in the city are colored salmon pink to match red-clay earth. Moreover, as one of the locals informed us, painting the houses in any other colors is prohibited by law.

Marrakech is the fourth largest city in Morocco. It was founded in 1062. A few times in its long history, the city was the capital of the kingdom. Today Marrakech is one of the busiest cities in Africa. It consists of the historic Medina or the Old City and the Guéliz or the New Town.

Two districts of Marrakech significantly differ from each other. While the Guéliz resembles European cities in everything from architecture to transportation, the Medina stays true to its ancient roots. Here streets are mostly very narrow allowing for only people, carriages, and motorcycles to enter them. The buildings are rarely high. And 19-kilometer ancient brick wall still separate the Medina from the rest of the city.

Landmarks of Marrakech in Photos 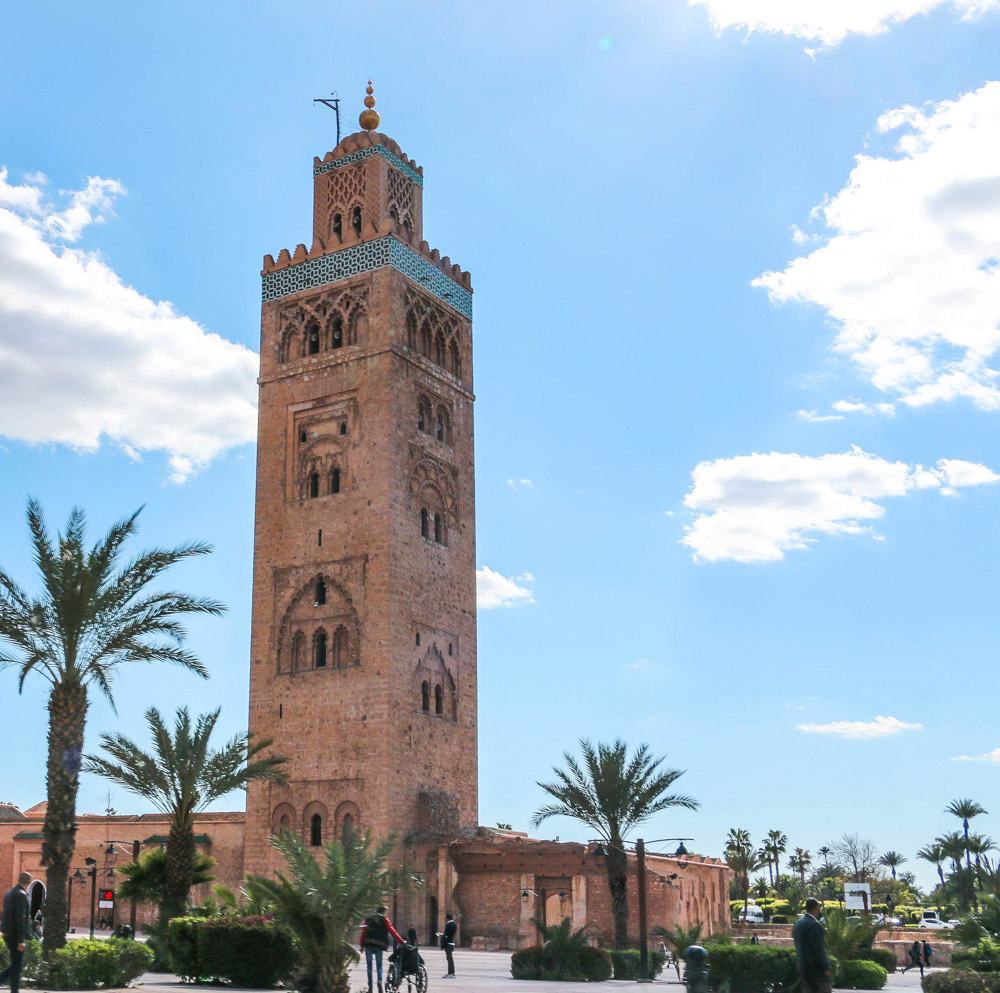 Koutoubia Mosque is the highest building in Marrakech. It reaches 70 meters (23 feet) in height and is considered one of the most important landmarks of the city. Certainly, the photos of Marrakech don’t to it justice. This stunning structure has been intriguing many visitor of the city. And although you can explore it from outside, only Muslims are allowed to enter the Mosque. 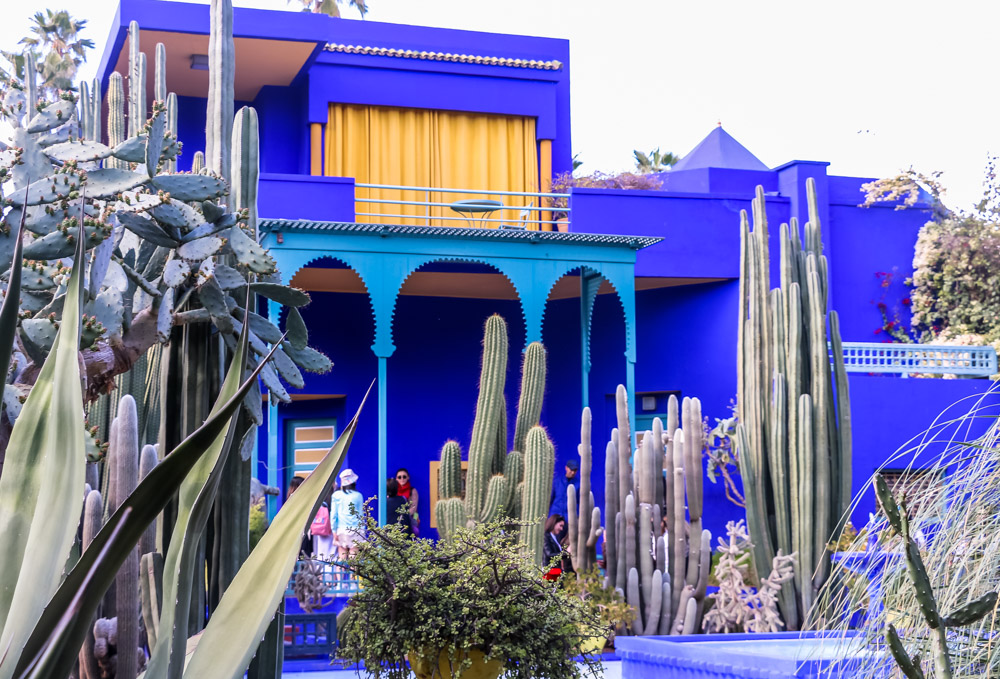 Marrakech might be known for its signature salmon pink color. But its own treasure, Majorelle Garden, impresses with cobalt blue, bright shades of yellow, orange, and red. The garden was the biggest project of French painter Jacques Majorelle who came to Marrakech to improve his health and fell in love with city’s vibrant colors and authenticity. The artist had been pouring his creativity into the garden for forty years. Later, however, his unstable financial situation forced him to sell the property. 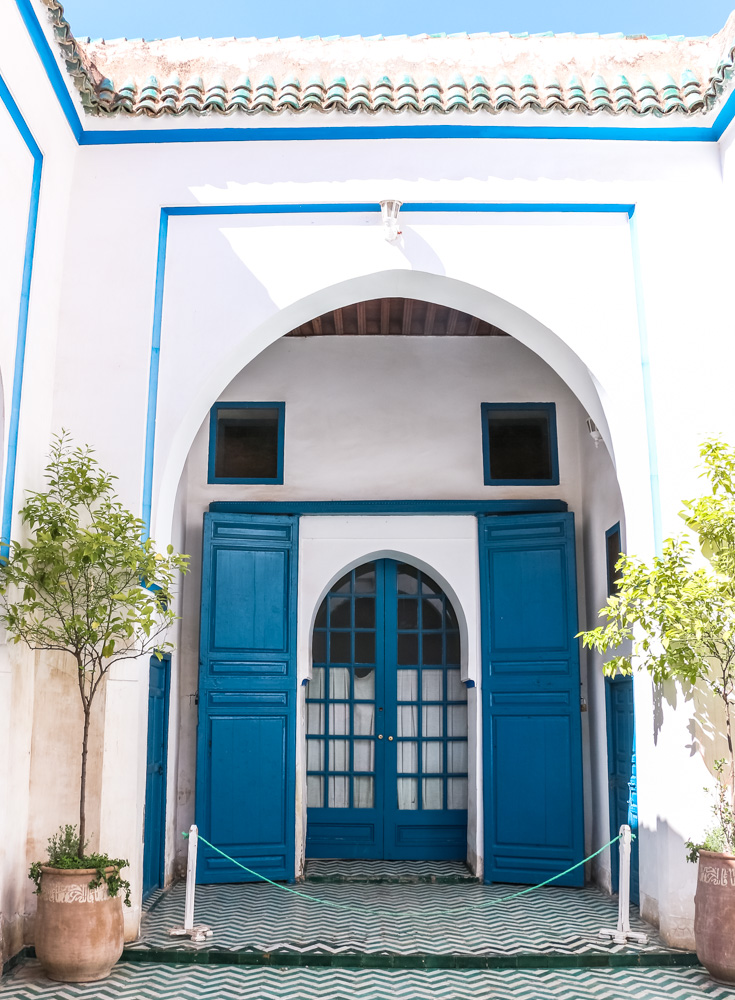 Bahia Palace is one of the most favorite destinations in Marrakech among its photos-driven visitors. The place came to life in the late 19th century. Today, it’s one of the greatest examples of traditional Moroccan architectural style. The Bahia Palace includes 150 rooms, lavishly decorated with carved stucco and cedar wood. However, only a small part of the palace is open for the visitors, presenting traditional green areas with fountains, living quarters, and apartments.