Munich is a heart of the Free State of Bavaria in Germany, known for the world’s most famous castle, Newschwanstein. As the capital of the state, Munich itself doesn’t stay in the shadow of this fairytale castle. Instead every year from late September till early October, the city gathers all beer lovers for annual celebrations of Octoberfest. In our case though, the beer wasn’t a reason to spend one day in Munich. We included this city in our backpacking trip in Europe out of curiosity. After spending some time there, it’s time to share our Munich itinerary and everything you can do in Munich in one day.

Reason behind Including Munich in our European Adventures

Before moving any further, there is a quick explanation how Munich ended up on our European travel list. Germany has always had a special place in my heart. No, I neither visited this country prior our trip a week ago nor had a lot of friends or family members there. But after learning German language and culture throughout all my childhood and later selecting it as my major at university, I felt especially close to this country.

Preparing our five-day European trip, I felt very strong about including Germany in it. As we also traveled to Prague and Zurich at that time, Munich appeared to be the best connecting link between these two cities. On top of that, our research indicated that you didn’t really need more than one day to explore the city. Thus, Munich with its perfectly imperfect itinerary stayed. And without further ado, there is everything you can do in Munich in one day. 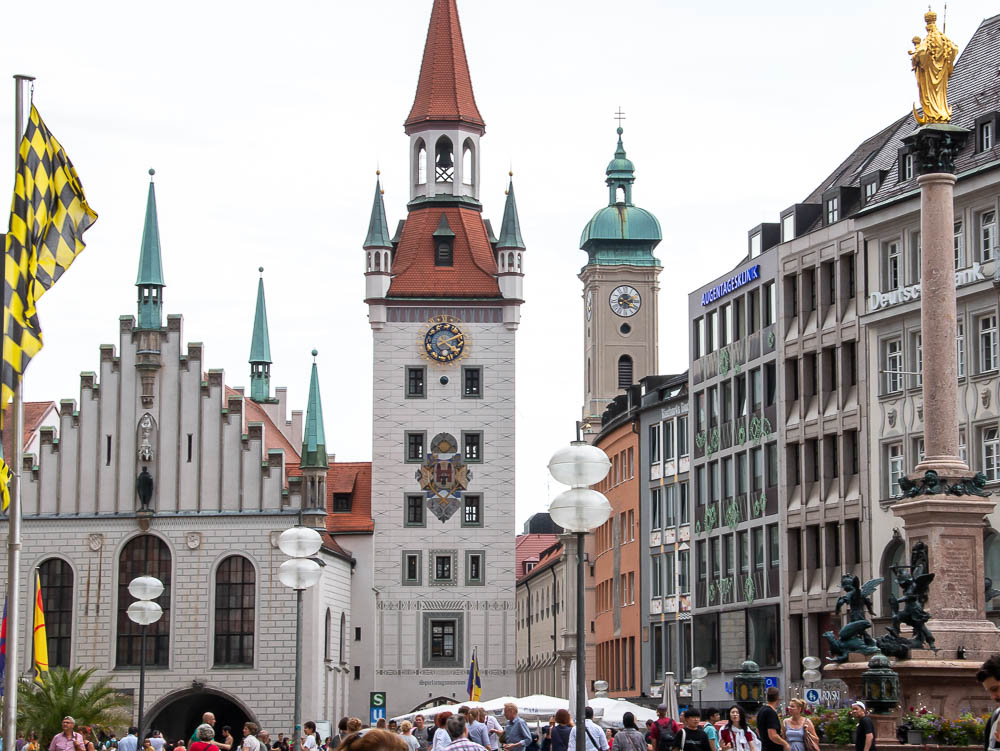 HERE IS OUR MUNICH ITINERARY THAT INCLUDES EVERYTHING YOU CAN DO IN MUNICH IN ONE DAY:

Everything you can do in Old Town Munich in One Day

I’m sure we didn’t get way too creative with our Munich itinerary by starting the day in the Old Town. To know the city, you need to start with its history and roots. And this is definitely what the Old Town is good for. A medieval town with cobblestone roads and Baroque architecture sets the mood right for a long day of exploring everything Munich has to offer. No precise itinerary is needed. The Old Town has its own charm that unveils itself in unpredictable way. So, it’s better to just let go of any lists and just slowly explore numerous streets of the place. Old Town Munich is relatively small. You don’t need more than a few hours of your day in Munich to see and do everything it has to offer.

However, if you are a history enthusiast like me and want to know a bit more about the place you visit, here are some of the major attractions in the Old Town. 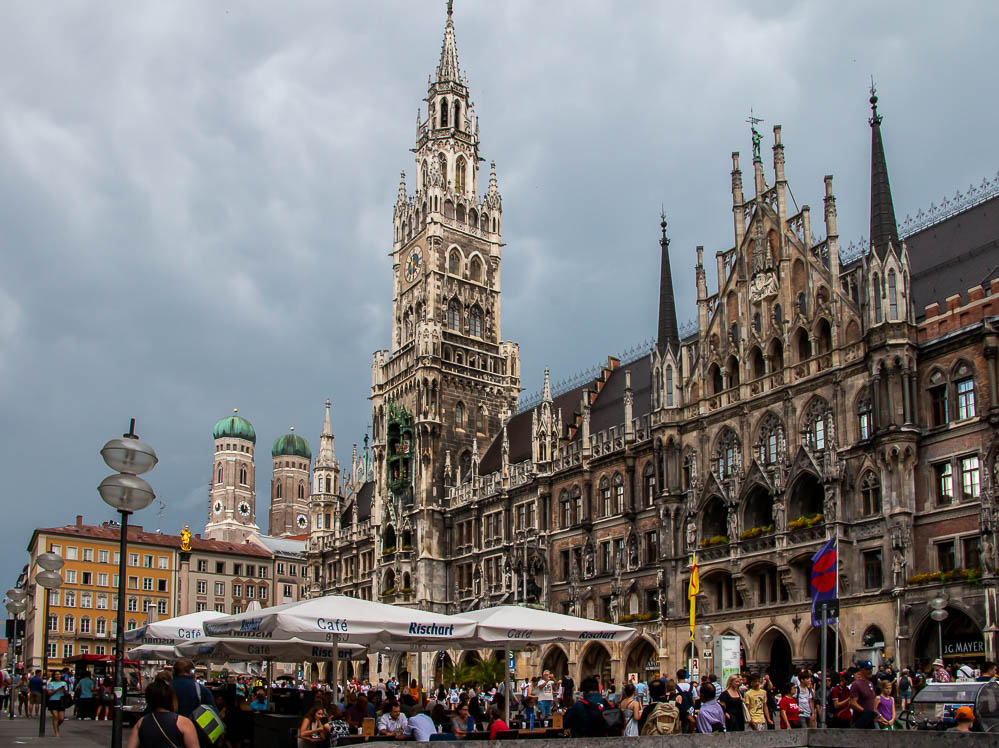 Marienplatz is one of the most visited squares in the Old Town. Moreover, it’s one of the oldest places in Munich dated as far back as 1158. The square with trendy stores, gift shops and ample places to taste traditional cuisine welcomes its visitors from early morning until late evening. 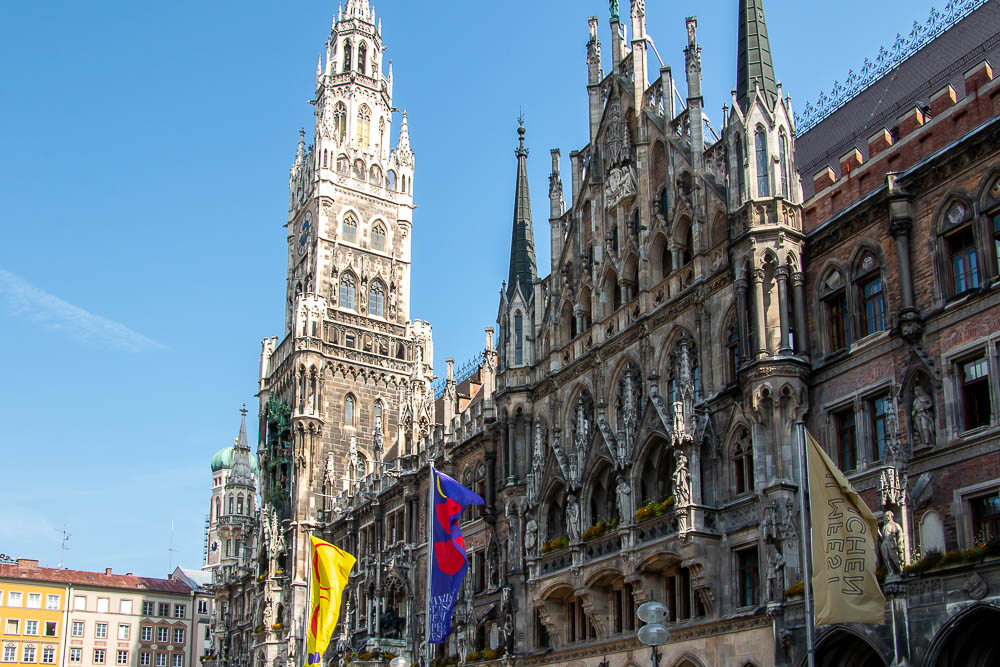 The main feature of the Marienplatz is the New Town Hall or Rathaus. Completed in the beginning of the 20th century, the Gothic-style structure impresses with its size and attention to details. The central piece of the New Town Hall belongs to the 280-foot-tall clock tower with the two-story, 28-foot-tall Glockenspiel. Two times a day at 11 a.m. and 12 a.m. short shows with help of mechanical figurines take place in the Glockenspiel. Summer months bring additional performances at 5 p.m. 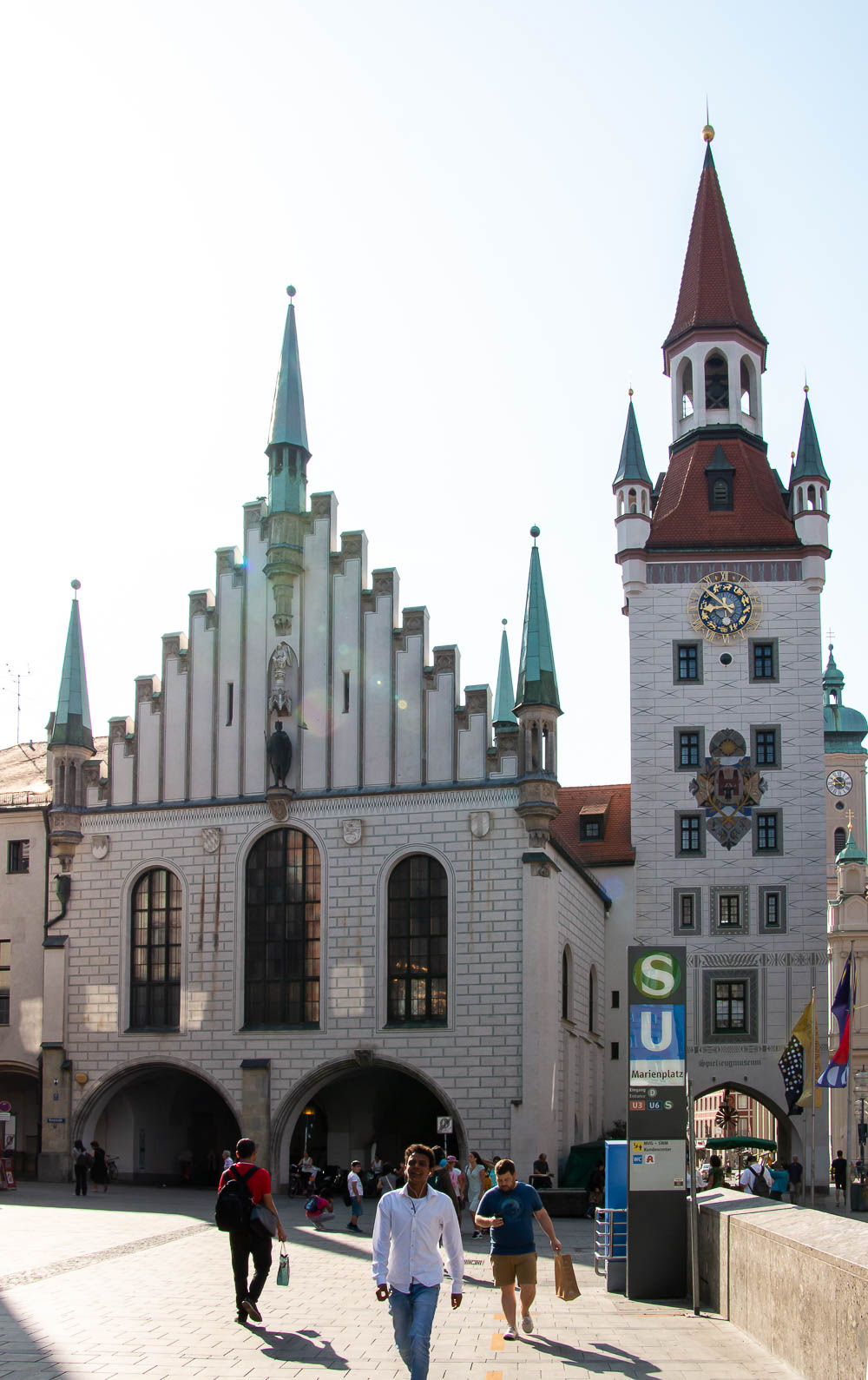 The New Town Hall didn’t move far from the Old Town Hall on the east side of the Marienplatz. Over the years, the structure underwent numerous serious reconstructions. The last one took place in the 1950’s after the Old Town Hall was almost completely destroyed in World War II. Despite competition from other attractions in the Old Town, the medieval building still stay strong as one of the most photographed places in Munich.

St. Peter’s Church is the oldest church in Munich. According to some sources, it’s even older than the city itself. The interior of the church is one of the things you don’t want to miss when exploring everything you can do in Munich in one day. When inside the church, make sure to look up at the painting on the ceiling depicting crucifixion of Saint Peter. If you don’t have anything against hiking, climb up to a fire balcony with scenic views of Munich.

The Frauenkirche is one of the symbols of Munich. On top of being the tallest church in the city, its signature twin towers got popularity as a few structures that survived devastations of World War II. Unfortunately, we were not able to get closer to the place during our visit to Munich due to a construction near the church. 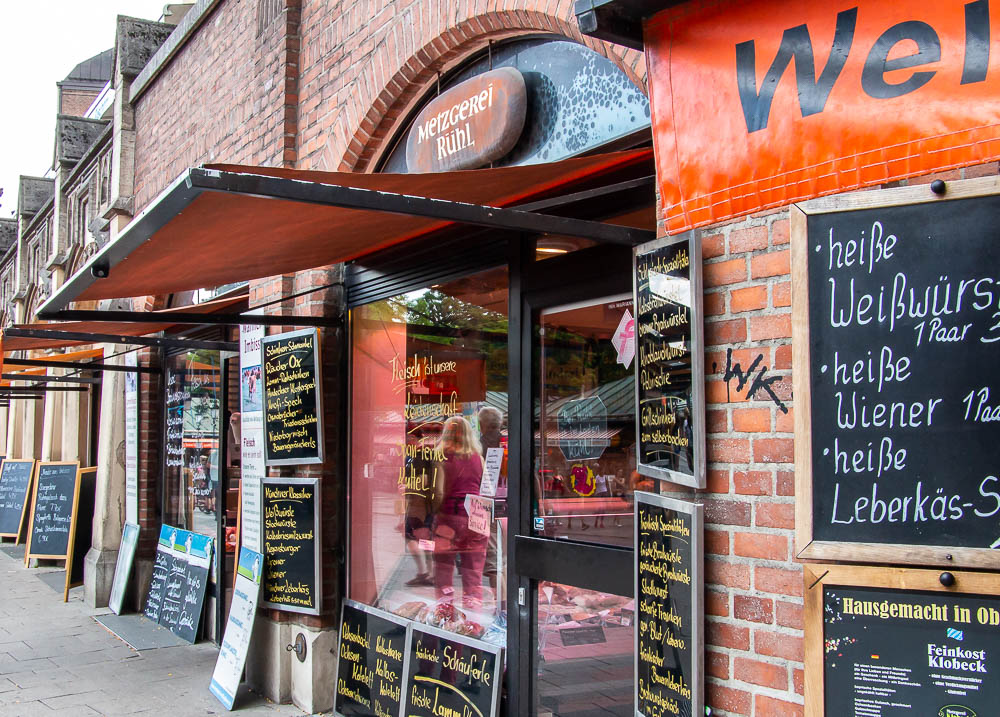 All gourmets in Munich know the way to the famous Victuals Market. Started as a farmers market in the 1700s, it grew to become one of the popular destinations for tourist and locals alike. From traditional German dishes to different kinds of beer and produce, the Victuals Market should be on top of your list of everything you can to in Munich in one day. 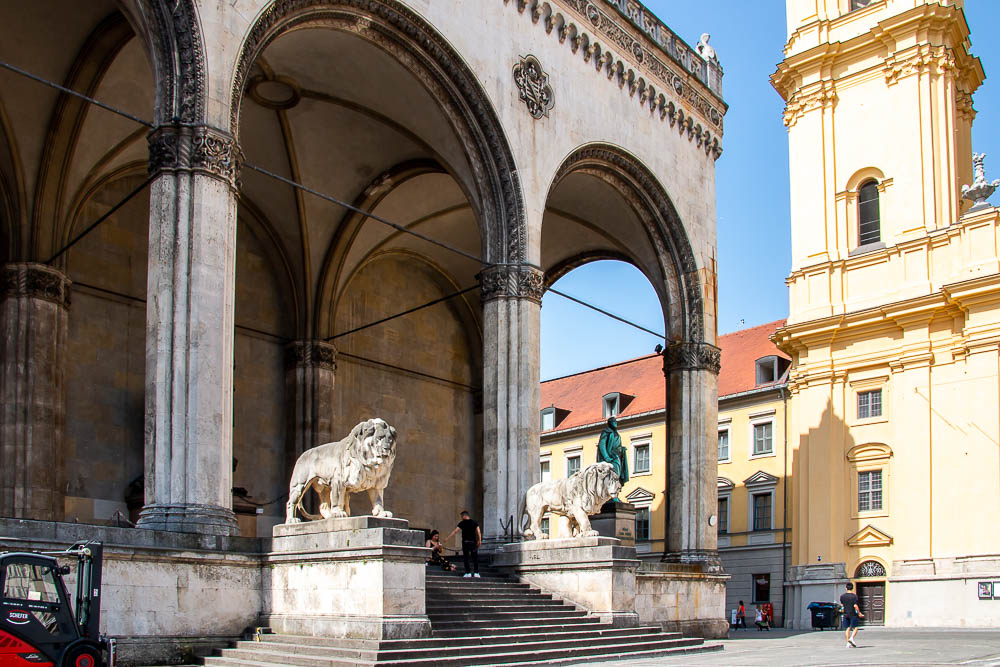 Next to the Marienplatz, the Odeonsplatz is another popular square in Munich. Heavily influenced by Italian architecture of that time, the square was developed in the early 19th century. Two main attractions of the Odeonspatz are Field Marshal’s Hall (Feldherrnhalle) and Theatine Church (Theatinerkirche). 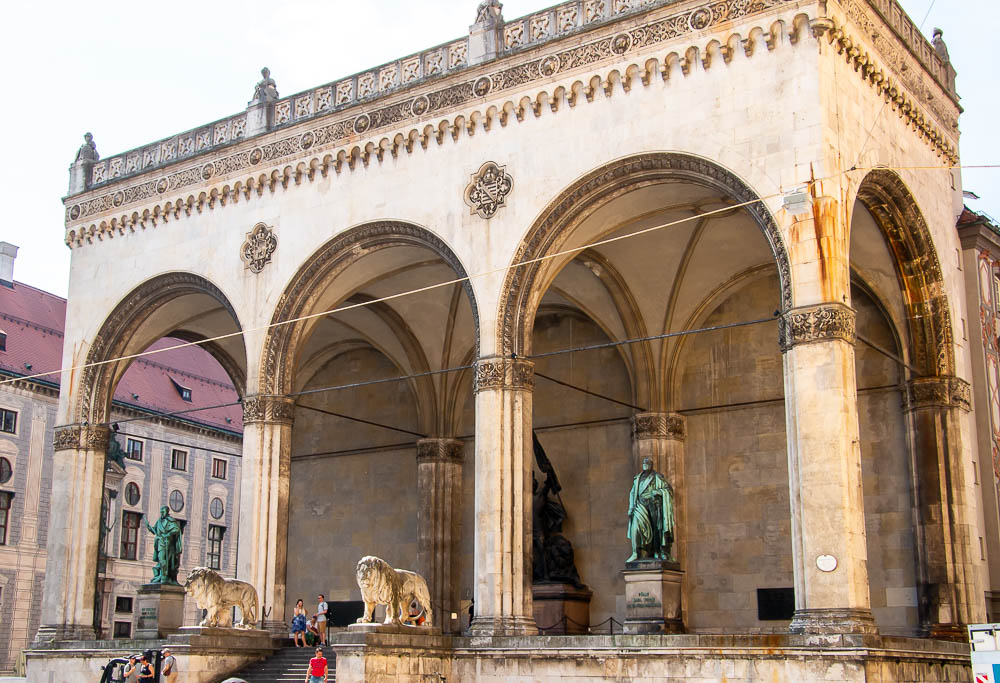 Taking inspiration from the Loggia dei Lanzi in Florence, the Field Marshal’s Hall was built to honor the Bavarian army.

Big yellow structure of the Theatine Church towers over the Odensplatz. Built a few centuries before the rest of the square, the church symbolized gratitude and is second favorite attraction to see in Munich. 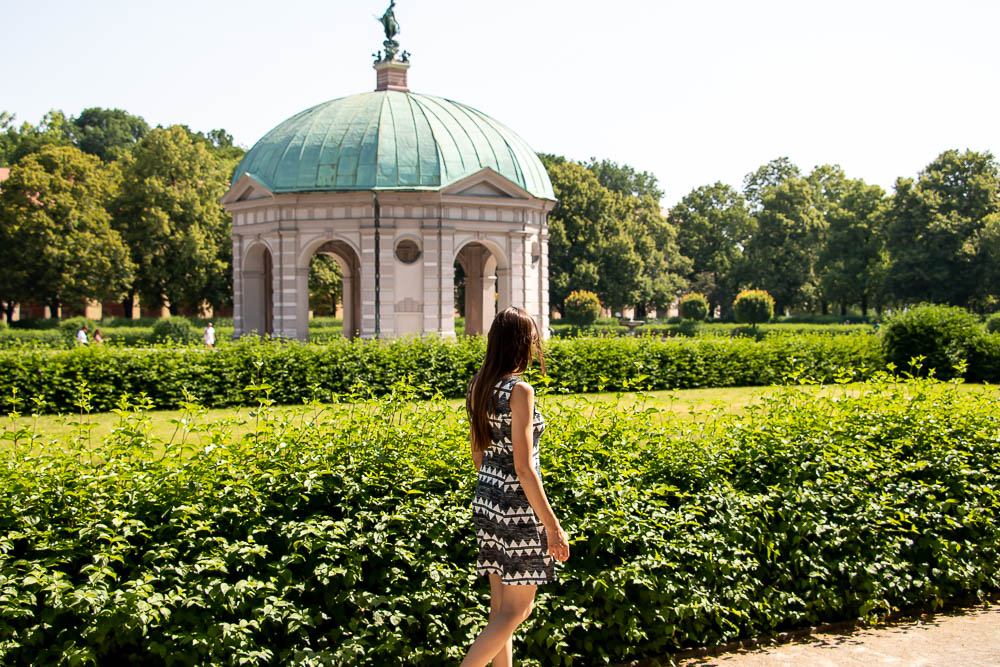 At that time our eyes craved some green spaces and a short break from the architectural masterpieces of Munich. The Hofgarten, located just a short walk away from the Odeonsplatz, came in handy. With simple temples and fountains, the garden looked nothing short of a subtle continuation of the best traditions of Munich.

The English Garden in Munich is one of the largest urban gardens in the world exceeding even New York’s Central Park. Besides green lawns, hiking trails and beaches by a river, the park boasts river surfing, the Chinese Tower Beer Garden and the Monopteros hilltop acropolis.

At that point, we decided to leave the Old Town and explore other parts of Munich. Randomly choosing the Ludwigstrasse, our Munich adventure took us to the Catholic Parish and University Church St. Louis with the second-largest altar fresco of the world. A short walk away from it, the Siegestor, city’s landmark between Munich’s Maxvorstadt and Schwabing, marked the end of the Ludwigstrasse and the beginning of the Leopoldstrasse. 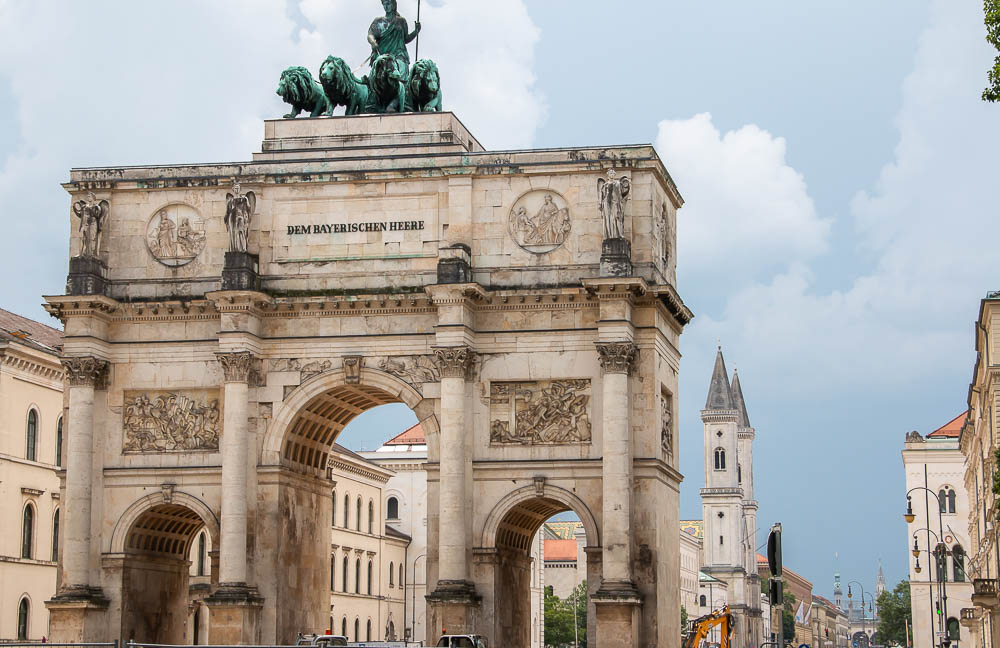 We took the Leopoldstrass and spent the rest of the day exploring the streets, restaurants and shops of the Schwabing district of Munich. However, before returning to our hotel, there were two more places to see in Munich during our one-day trip.

The Olympiapark is a famous park in the Oberwiesenfeld neighborhood of Munich. Constructed for the 1972 Summer Olympics, it still serves as a venue for different events and celebrations. 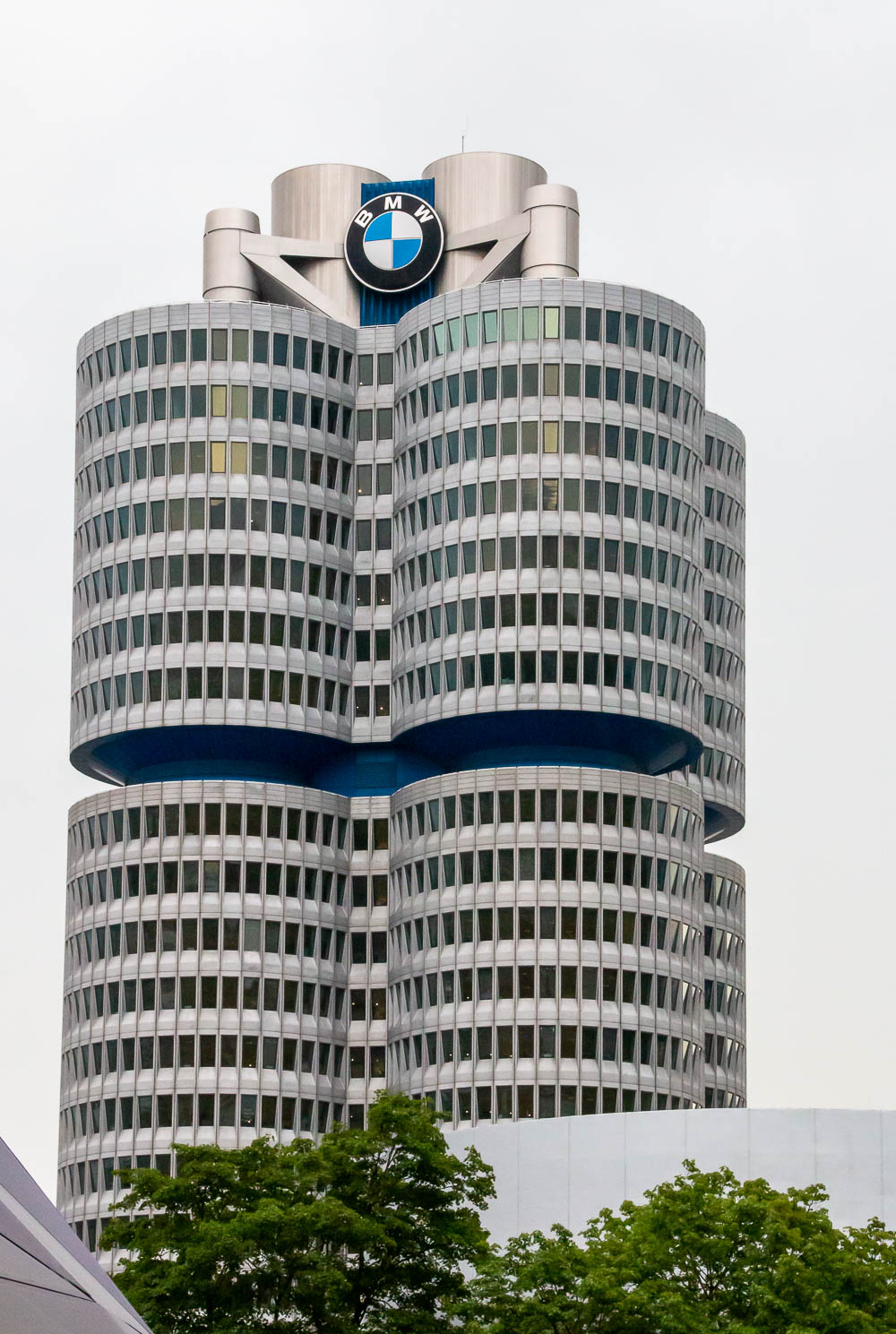 With BMW, one of the largest producers of motor vehicles in the world, headquartered in Munich, it is quite appropriate to open BMW Museum in the same city. Located near the Olympiapark, the museum is devoted to the BMW Company, its history and cars.