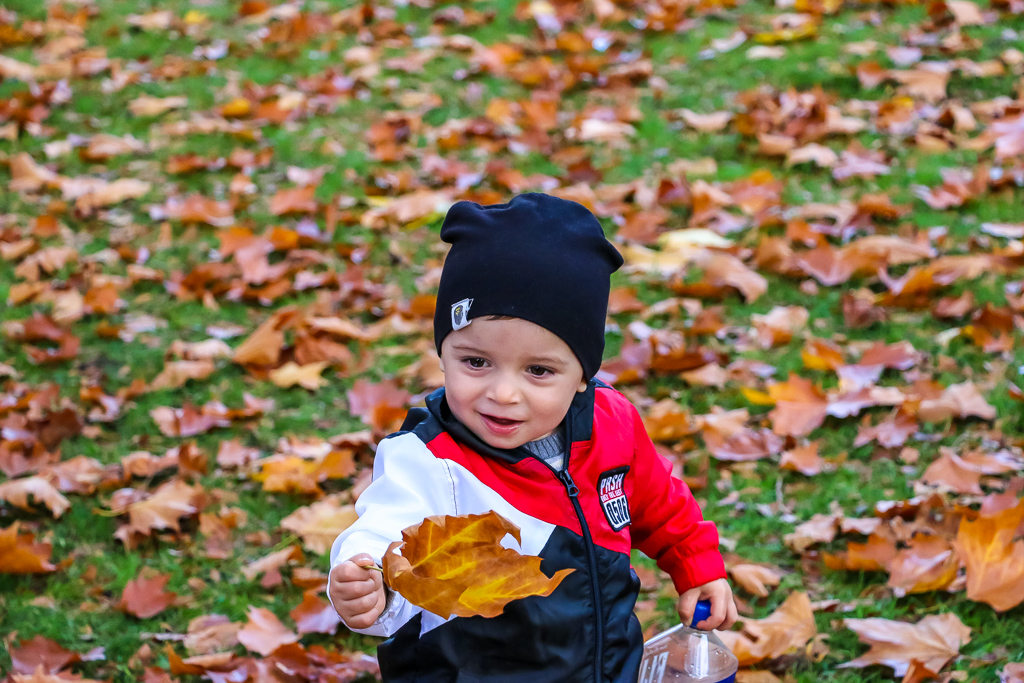 I was sitting on the floor, waiting for my 18-month baby to finish chewing his food before I could slide another spoon into his mouth. Wow, he is a “big” little boy now. He feed himself when he wants it. He eagerly eats what he likes and turns his head away from food that doesn’t look appealing to him. But there was time when I would have almost jumped up every time this baby had opened his month to receive a spoon of puree-like food… And this is when an unexpected thought struck me. There were a lot of first things for Dylan, but unlike many other babies he had the privilege to experience some of them in different parts of the world. A few of these first-time travel experiences are so unusual that even an adult would envy.

Here are Our Baby’s 20 First-Time Travel Experiences that Even an Adult Would Envy:

1. First time walking on a glass bridge in Arizona

4,000 feet above the Grand Canyon in Arizona is nerve-wracking for many adults not talking about children. Walking on the bridge and seeing the deep chasm under your feet pushes all the boundaries. We wanted to experience this new attraction of the Grand Canyon called Skywalk. Dylan went with us. He didn’t walk then yet. My husband carried him to and on the bridge. Nevertheless, it didn’t prevent our baby from putting a mark next to this first-time experience.

2. First time wobbling on a suspension footbridge in Vancouver, Canada

By the time we visited Capilano Suspension Bridge in Vancouver, Canada, Dylan was running non-stop most of the days. And yet his farther again had to cross the bridge holding him firmly in the arms. A wobbling suspension bridge is a fun first-time endeavor, but not the one that a little boy can conquer by himself. 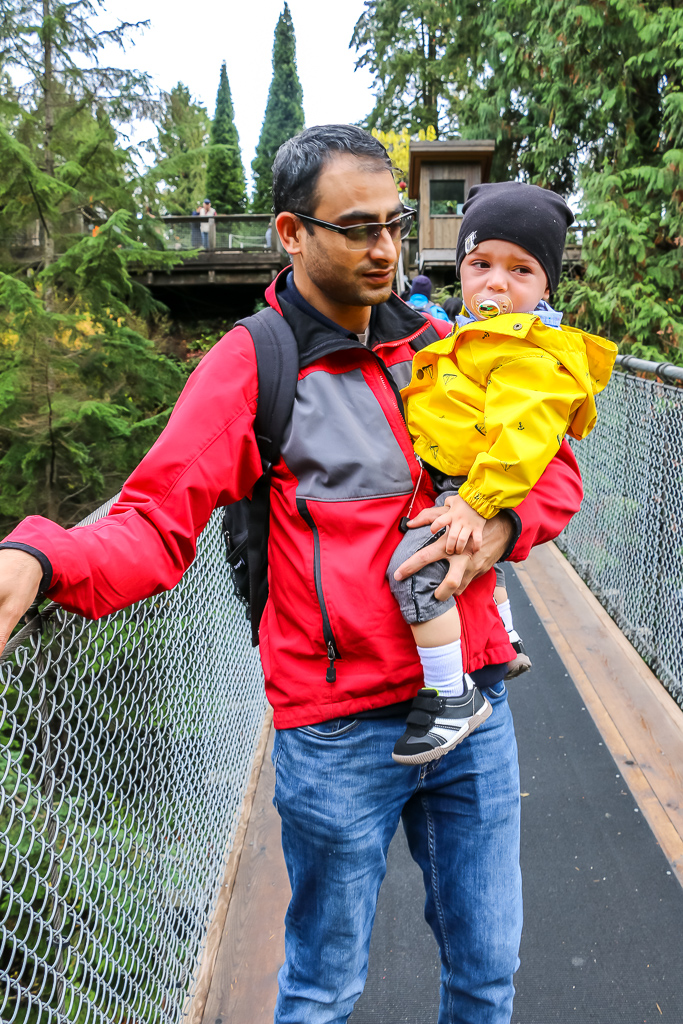 You really can’t think of a better place to introduce your baby to solid food such as bread than in the country that defines the word “cuisine”. 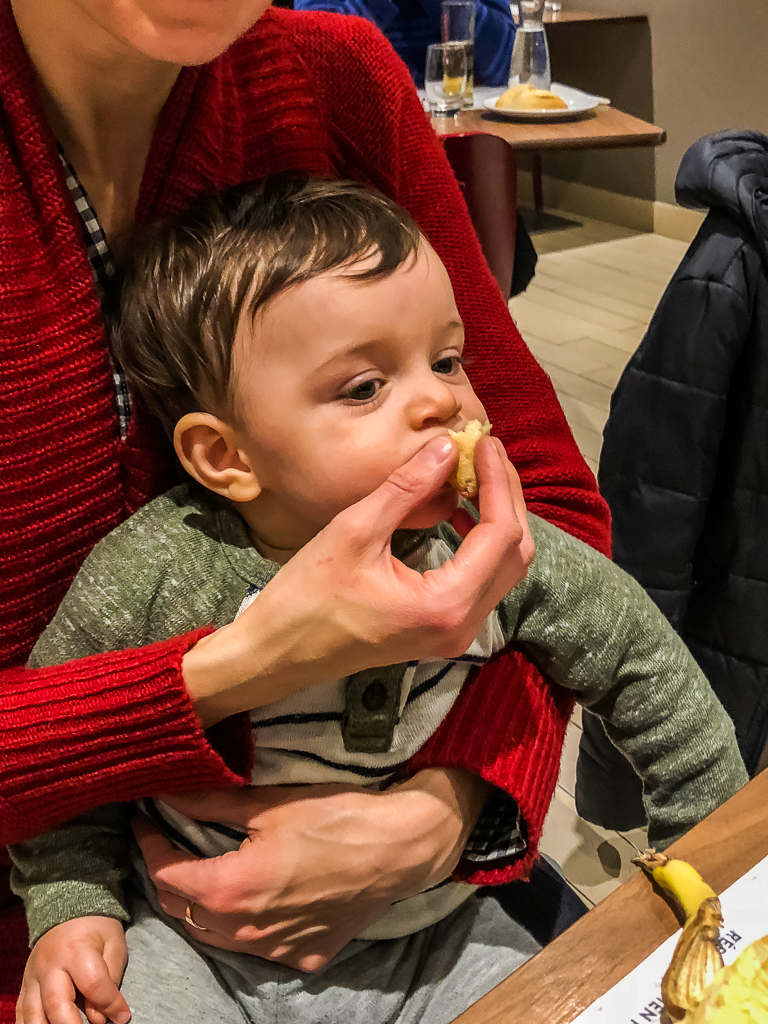 We went to Canada in October. Oh boy, that was the best time for a baby from Southern California to put his little hands in the colorful fall leaves and playfully throw them around for the first time ever. 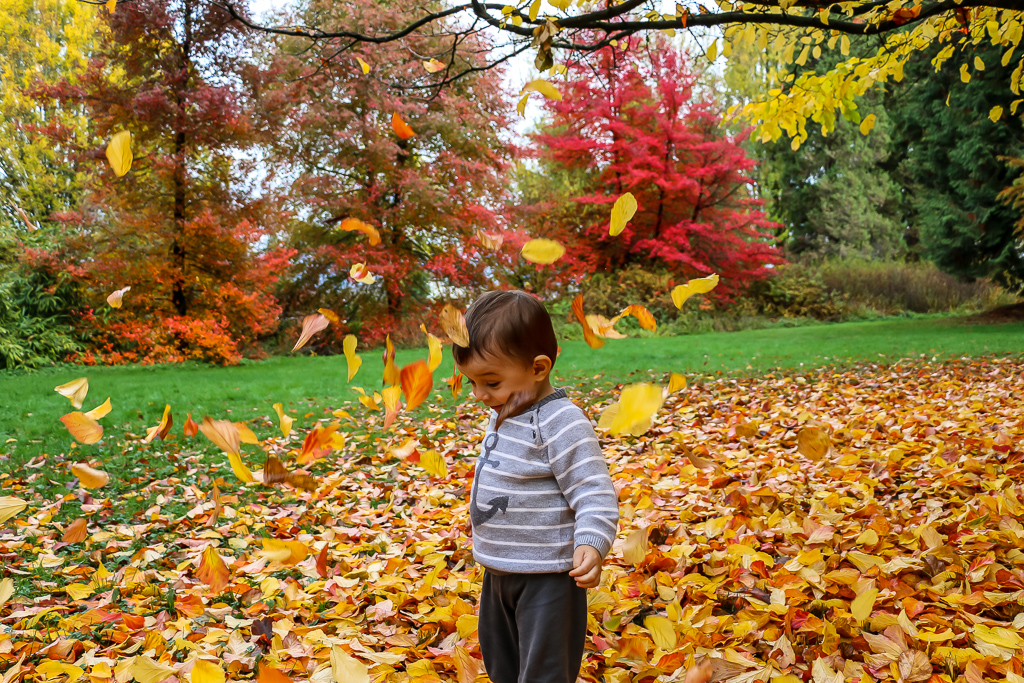 5. First time paddling down the Wailua River on Kauai, Hawaii

Apparently, that was Dylan’s least favorite first-time travel experience. He cried all the time. And it was all because his mummy accidentally left the baby’s pacifier in the trunk of a car before boarding a little canoe. 6. First time dipping the feet in the ocean on Kauai, Hawaii

We live in Los Angeles, a coastal city with over 15 beaches. However, it didn’t feel right to let Dylan experience the ocean there. On top of that, the boy was ready to run away as fast as his tiny legs allowed at the first sound of the raging waves. Tropical weather or relaxing spirit of Kauai helped change the things and made this first-time experience possible. 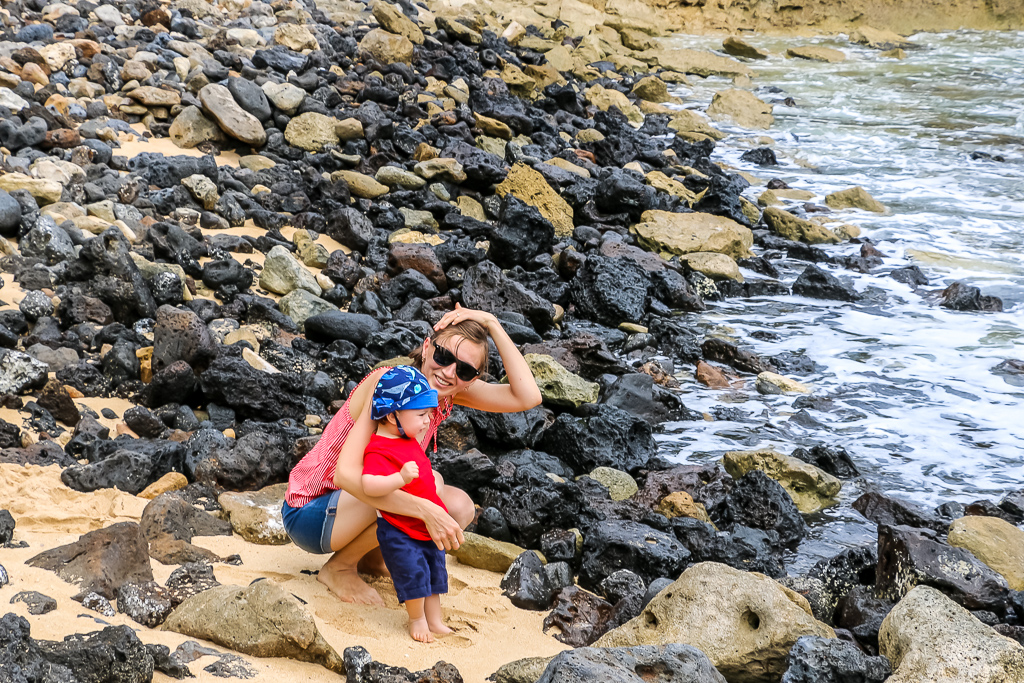 First dip in the ocean

A train ride is always a fun and enjoyable experience, especially for a baby who isn’t tied to his airplane or car seat and has more freedom to more and walk around. Riding Eurostar happened to be a win-win situation not only for Dylan but also for us. It was so easy and comfortable to travel from one country to another. Moreover, we had a great opportunity to show our little boy what it is like to ride trough a tunnel.

The view of the city and surrounding desert was incredible. But the tramcar is what grabbed Dylan’s attention. This didn’t come as surprise for us. The Palm Springs Aerial Tramway, the world’s largest rotating tram car, can be quite an experience even for an adult.

Most babies like animals. During almost every encounter with the representatives of the animal world, their little fingers strive to touch fluffy wool of the four-legged inhabitants of the planet Earth. Dylan is not an exception. His joy was overflowing when he pointed at every single resident of the Alaska Wildlife Conservation Center and asked: “What is it?” 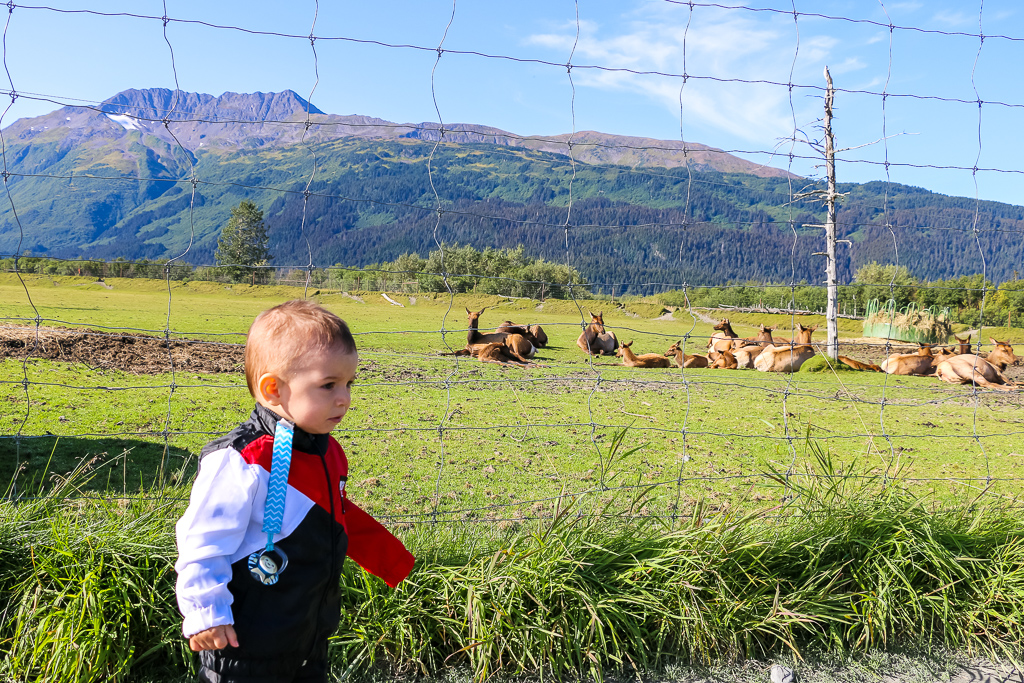 Watching wildlife for the first time

This experience became a mini show not only for us, parents, but also other vacationers that happened to be near coconut stand on Kauai. As soon as a lady selling these super nuts (I really believe there is nothing like the coconuts) handed us our refreshing “drinks”, Dylan couldn’t stop grabbing them and saying something in his baby talk. He didn’t know exactly what it was but wanted to experience it anyway. So we provided him with this chance. And the baby pulled it off, which made his parents and standing nearby strangers smile and congratulate this little achiever. 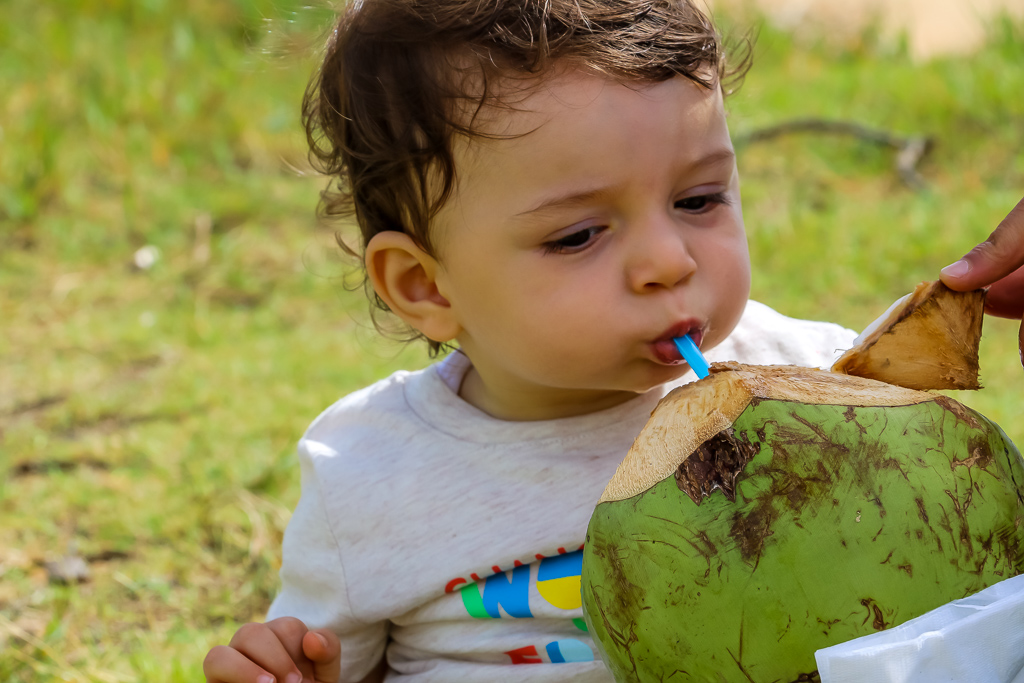 11. First time sleeping in front of the Eiffel Tower in Paris

People come to Paris to admire the Eiffel Tower. Dylan decided that sleeping in front of it would count too and definitely justify all the trouble of exploring French capital in freezing weather. 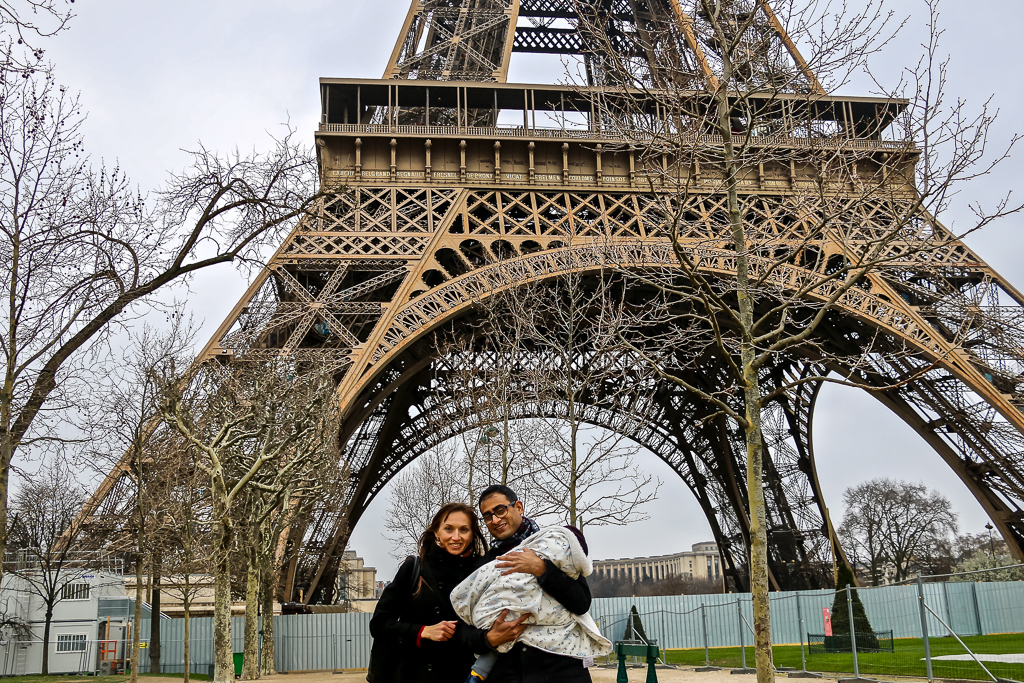 Snow in Southern California is a rare phenomenon. You get more chances to see it and play snowball high up in the mountains. This is exactly what we did, went to high elevations of Sequoia National Park to show Dylan the winter miracle.

I have to admit Joshua Tree National Park was my first proper desert travel experience as well. Dylan was around eight months then. But even at that age he showed a clear interest in the area, especially funny-looking trees everywhere around him. 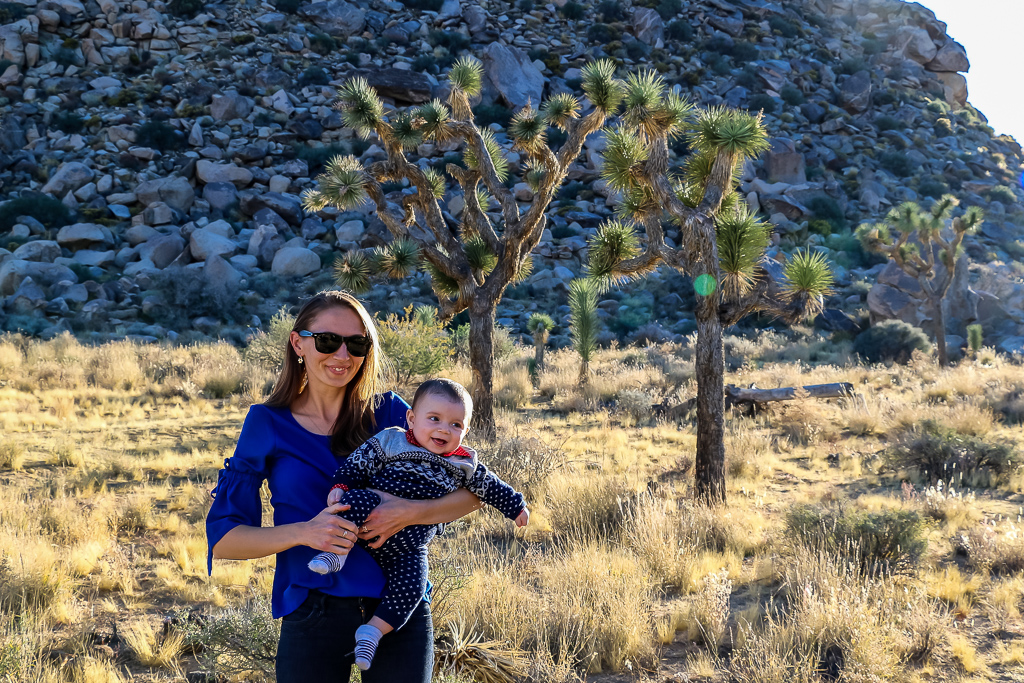 The better way to see most of a coastal city such as San Diego is by experiencing it from a cruise ship. Our little baby boy couldn’t agree any more.

Long flights can be exhausting for both the adults and babies. But Dylan nailed it, and we haven’t stopped ever since.

Camels are unique and incredible creatures. They look so calm, exotic, and welcoming to ride them through a great deserted land. Unfortunately, we all, including Dylan, could only be content to see them, since camel rides in Marrakech were offered only to people of the age of two years and older. A black taxi ride is an obligatory first-time travel experience in London, especially when it’s dark, cold, and showy outside. 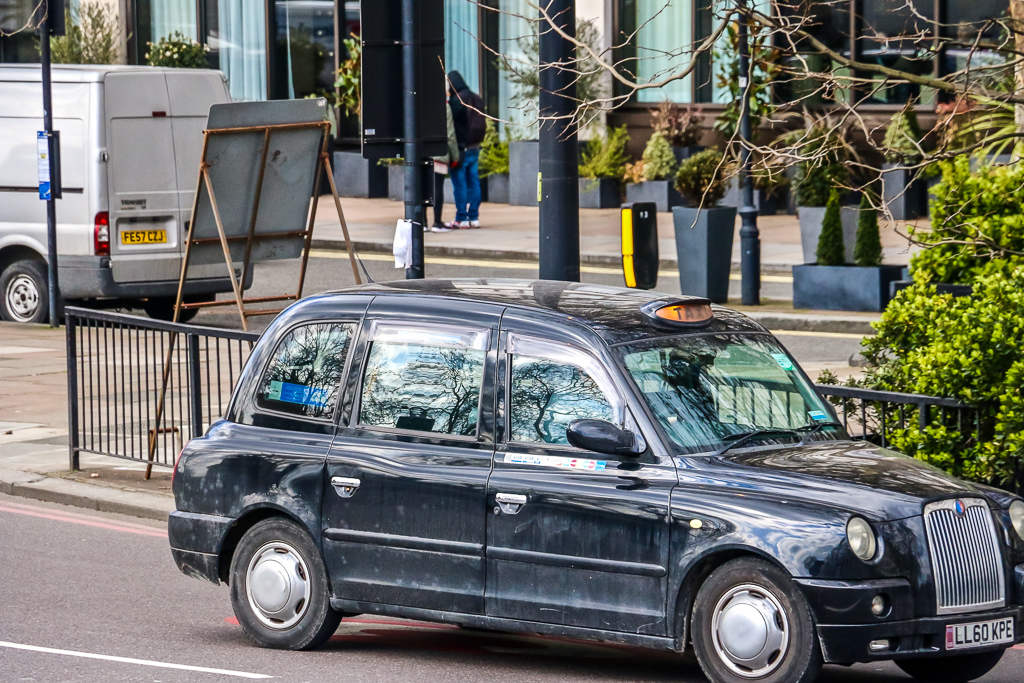 In Dylan’s case, it was being carried all the way to the top to enjoy stunning views of the classic Paris with its iron lady, Eiffel Tower, in the distance. Our baby boy, however, unlike his parents, didn’t show particular interest in all of them. His main concern seemed to include only staying cozy and warm in the arms of his father. 19. First time riding through the longest mountain tunnel near Whittier in Alaska

Despite dim light and creepy feeling, Dylan managed almost seven-minute drive through Anton Anderson Memorial Tunnel exceptionally well. On the bright side, the tunnel was just a gateway to Whittier with its beautiful sights, a place where the boy could finally get out of the car and run.

For this unique travel experience, we opted for Hop-on Hop-off sightseeing bus tour. It was easy, convenient, and hustle-free way to get to know London. And above all, Dylan liked it a lot! 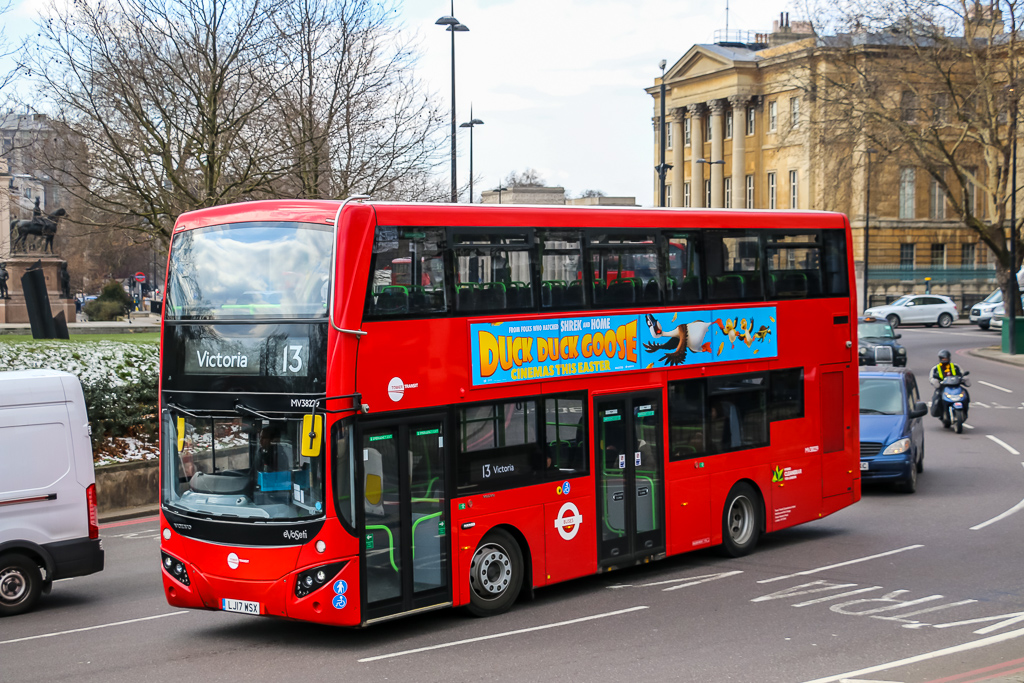 21. Bonus first-time travel experience that even an adult would envy…

Or should we rather say experiences (with an “s” at the end)? These are those precious moments that await us ahead, memories that need to be created and cherished together as a family with a traveling baby. The most exciting part is that these incredible first-time travel experiences keep only multiplying as the time goes.